You are here: Products Men Under Fire by Jacki Delecki 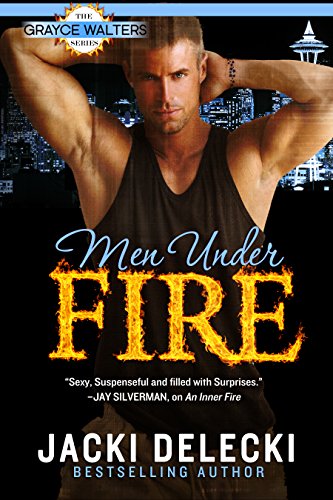 Men Under Fire by Jacki Delecki

In Grayce Walters’s most perilious case yet, sparks fly between Sergeant Nick Welby and feisty, tattooed office assistant Hollie Thomas. Together with Nick’s bomb-sniffing dog, they’ll have to save Seattle from a deadly terrorist plot–before it all goes up in flames.

I wanted to tell the story of Grayce Walters's assistant, Hollie Thomas. Set in Seattle, Washington, my hometown, the Grayce Walters novels frequently feature military heroes and heroines battling the threat of terrorism as a tribute to human and canine service members. I also incorporate many of the city's unique and colorful locations into my stories, and my volunteer work with Seattle's homeless shelters inspired one of her main characters. My two Golden Labs, Gus and Talley, were my constant companions. Their years of devotion and intuition influenced me to write dogs as main characters alongside my strong heroines.

Sergeant Nick Welby forced himself to look up at the plane roaring above him and ignore his primitive instinct to break into a run. His heart punched against his chest in painful thuds. A Boeing 737—not enemy fire. Seattle’s Fremont neighborhood—not Afghanistan.

He took a calming breath and then another. The hipster neighborhood, filled with buzzing cars and rushing crowds, ratcheted his already revved-up nervous system, making every sound and movement chafe against his jangled nerves like an open wound.

The golden lab, like him, was tense and hyper-alert, waiting for disaster to strike. Both he and his dog were on sick leave. A month had helped to heal their physical injuries, but neither had made progress in calming their stress reactions. They both saw and felt danger everywhere, every day.

He stared up at the refurbished warehouse situated on the waterway to Puget Sound. Adrenaline surged through his body at the idea of walking into the unknown building. He was sweating heavily, as if he were still in the heat of the Registan desert instead of the August summer day in the Northwest.

A white-and-black sign hung on the warehouse: Grayce Walters, DVM, Animal Acupuncturist. He bent and petted the attentive dog. Talley’s soft chocolate eyes echoed the feelings stuck in his throat. “I don’t like it any better than you do, but this doctor will help you.”

Nick didn’t have a lot of hope for his own recovery, but he couldn’t let his partner suffer. Doc Samson, the Welby family’s veterinarian, had sworn by the amazing skill of this doctor. He paused and blew the air out of his constricted lungs and then pulled the door open. He’d do anything to help his partner heal from the IED explosion that had almost taken both their lives, even walk into this dangerous unknown.