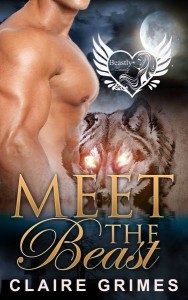 It’s FREE! For a limited time you can also grab Books 1, 2 & 3 in the Beastly Beauty Series.

When a curvy, independent woman is compelled to get a Sugar Daddy to help pay for her fathers’ medical bills. She must either meet the beast or what her father die from cancer.

Monica may have struck gold or have the worst luck ever because there is something off with this man. Why is his home staffed by unusual individuals with pail skin and white hair? Furthermore, why in the world does a man like him have to purchase a spouse?

When she’s not crafting her tales, Claire’s hobbies include: Wine, Cooking, and World Domination. You can now find her work for purchase on Amazon Kindle.

I wanted a unique approach to the typical shape shifter romance.

I shook my head. “I can’t take your money. Besides, I don’t think it will be enough. He could need years of chemo and extra treatment. I need a way of making money.”
“It’s always on offer if you need it. You know that.” She hugged me and I sighed.
“But there isn’t that much I can do to make money. I mean, I have thirty thousand and that might cover surgery. Might. It took Daddy and me around twelve combined years to save this money. I have no degree, nothing to sell, what more can I do?”
“Have you thought of loans?” Martha asked.
“I’m not sure I can get a loan for enough.”
“What’s your credit rating like?”
I seriously had no idea. Martha spent the next few hours trying to teach me about loans, credit cards and insurance. By the end of it we worked out that even if I took out a maximum loan at every bank I could get to, my rating was so invisible that there wouldn’t be enough money.
“I just don’t know, Monica.” Martha sighed. “You don’t really have any talents or anything in particular you can sell. Maybe if you accepted my money and took out the loans you could get him surgery and chemo, and then we could care for him ourselves. We’d have the debt collectors on our backs quickly, but at least he has a chance at surviving.”
“I guess that’s the only way. I just wish you didn’t have to throw away all your savings and a few years of your life for this. It isn’t fair.”
Martha shrugged. “Life isn’t fair when you’re poor. It’s a trap.” She laughed a little.
“Wait… there is something I could sell.” I corrected her. “Just… don’t go crazy on me.”
“What have you got? Anything is good if it gets you the money you need.”
“Well, I’ve got… me.” I said.
“No, no, no. You can’t cheapen yourself like that! Besides, do you know how many guys you’d have to sleep with to make that sort of money?”
“Or I could find one or two crazy rich guys.”
“Yeah, like a millionaire would pay to have sex with a poor chick like us… unless… Monica, have you ever heard of sugar daddies?”
I nodded. I had. It was the dream of many a young poor girl to end up marrying a rich man who could lift us up out of the neighborhood and let us live the lives of our dreams.
“Well, there is this online movement now… It’s basically sugar daddies and sugar babies finding each other. Maybe if we create an account for you we can find someone with more money than sense. A guy who is prepared to throw a hundred thousand bucks your way in the first few weeks of knowing you. They’re out there. We just need to sex you up a bit, take a picture and write a steamy profile for you.”
I was a little taken aback at first. But I had been the first one to suggest selling myself. So I put on a brave face and we looked into it. Sure enough, there were websites wholly dedicated to rich men looking for pretty young women to spoil rotten. So we had a look at successful profiles to work out how to word things, took some nice pictures of me in some of Martha’s sister’s sluttier dresses and made an account.
A part of me had secretly hoped I would get a sudden influx of messages. But sugar babies outnumbered sugar daddies hundreds, maybe even thousands to one and after a few hours tensely waiting I called it a day and went home. Once home I decided not to tell my father much. Just that the money wouldn’t be enough so I was thinking of ways to make more money. He would hate it if he knew I was basically becoming a very expensive escort to make money for his surgery. So I didn’t exactly lie. I just didn’t tell him the truth.
The next day I was patient all day and didn’t log onto the site at all. I wanted to keep calm and responsible. That evening I checked my messages. I had four or five. But two were from other sugar babies and all were saying the same thing. That I was too big, too fat, too ugly to be a sugar baby. That I was bringing the site down. That I was wasting my time. It upset me, but I just deleted the messages and held out a bit.
But day after day it was the same rubbish. Messages from other site members reminding me that I didn’t belong. Even when a potential sugar daddy was interested, the second he heard how much I wanted and what I wanted it for he would accuse me of being too expensive, tell me that I should be grateful for his offer and claim I was going to spend it all on drugs anyway.
It seemed like even selling yourself was only for cute, thin, white, middle-class girls. Poor Hispanic girls with big curves and a strong attitude need not apply. Being so poor was how come I was looking at this work. And it was apparently also a reason for everyone to reject me.
I was starting to lose hope when his message came through.