You are here: Products Meet Me at the Gates by Kelly Wyre 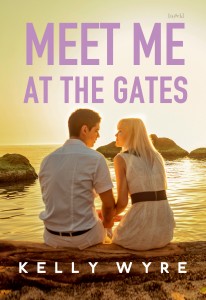 Meet Me at the Gates by Kelly Wyre

Outer Banks bookstore owner Hyacinth Silver Fox has a secret millennia in the making: her soul was magically entwined with another, and at night she dreams of every lifetime they’ve ever spent together. The rules of their magic are simple: Hydee always knows her lover, but he, or she, doesn’t remember her. It’s up to Hydee to find and make her soulmate see they are destined for each other, and this lifetime is no different, but there’s one problem: her soulmate is Theo Monk, heartthrob actor and Hollywood’s sometime-infamous badboy. Hydee’s hope of reuniting is wearing thin, but she has no idea how dire the situation really is.

Because meanwhile in California, Theo Monk is losing his mind. Anxiety and paranoia rule his life, along with his on-again-off-again girlfriend and her entourage. When fear and frustration push him to an edge, Theo cuts and runs as far from his problems as he can without knowing Fate’s giving him one last shot to unite with the only person who can help him. Hydee and Theo must save one another before hope runs out and Hydee’s despair and Theo’s fear keep them apart forever.

Kelly relishes the soft and cuddly and the sharp and bloody with equal amounts of enthusiasm. She’s a coffee addict, an avid movie lover, a chronic night owl, and she loves a good thunderstorm. Currently Kelly resides in the southeastern United States.