You are here: Products Mediums Guild by Lee Fishman 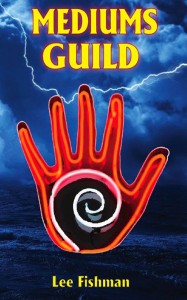 Real estate agent Margo Fellshur can’t catch a break in a slow housing market. And her hopes of financial stability grow dimmer by the minute. For extra cash, the single mother works weekends as a psychic, reading cards and palms at parties – and she’s good at it. Too bad she can’t resolve her own issues. As a kid, Margo took her gifts for granted. Couldn’t everyone see auras and hear the thoughts of their friends? When a chance encounter connects Margo with a young pilot, he asks for her help in finding his sister who disappeared months before. Margo recruits fellow psychics but they come up short until a dream changes everything.

Lee’s worked as an archaeology technician, candy-maker, teacher, tour guide, actor, psychic, and a career counselor. Along the way she found her true calling, writing. She particularly enjoys unraveling mysteries and in her next life, in addition to being six feet tall, she’d love to be a detective.

Some years back I actually worked as a psychic and had the opportunity to meet and get to know some great people doing it. One night at a psychic fair a young man came to my table asking for help to find his sister who went missing. My friends and I tried to help. We came up with some ideas and luckily she was found alive.