You are here: Products Mason’s Revenge by Lorena Jackson 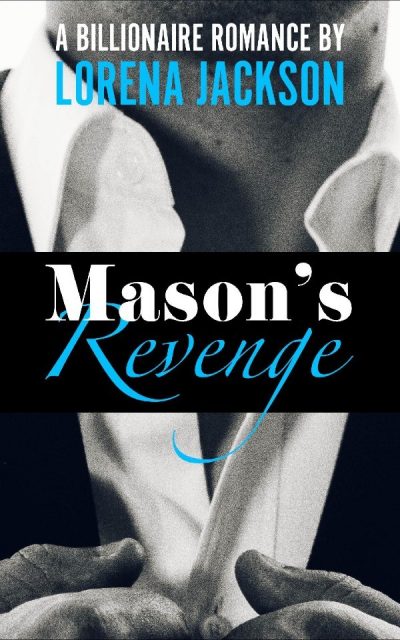 Mason Archer is one of London’s most eligible bachelors; he’s mega-rich, hot and brooding. Perfect for any woman. Except this ruthless billionaire has no time for love when he’s so consumed by revenge. A revenge that’s been in the making for fifteen years and there’s one main target – the beautiful Polly Taylor.

Polly has no idea what to expect from her new billionaire boss who saved the company from financial disaster. All she knows is that he’s an arrogant jerk and she definitely has no intention of mixing business with pleasure.

Rupert is the billionaire’s best friend. Good-looking, charming and rich too. When he sets his sights on Polly, can she resist the charms of this international playboy? What will Mason think of his best friend making a play for the woman he has such mixed feelings for?

When sex and emotions get involved and secrets are uncovered, will true love find a way?

Good god, this Mason Archer proved an even bigger jerk than she expected. If she wasn’t very much mistaken, he sneered at her out on the street, refused a hand-shake and then left her standing there like a total idiot. When she followed them to the lift, he didn’t bother pressing the hold button, instead allowing the lift doors to shut on her. His final act was to nick her secretary just like he owned the place. A scowl crossed her face as she remembered that the big arrogant pig did own the place. Damn you, Mason Archer. There was no way he was going to intimidate her like he did with the rest of his staff, even if he was incredibly good-looking.
“Traitor,” she called out to Louisa a bit later on. Half joking but half meaning it too.
“I’m so sorry, Polly; I had no choice. He’s the boss after all. He’s lovely, don’t you think?”
Lovely was definitely not the word she’d use to describe this Mason Archer person.
“He seems a bit familiar don’t you think?” asked Louisa.
No, if Polly had met him before she’d have remembered.
“You’re right. He probably just looks like one of those movie stars with his Hollywood good looks.”
“I didn’t notice,” she lied. “Anyway, haven’t you got any work to do?”
“You’re not my boss anymore, remember?” Louisa cheekily reminded her.
How could she forget? The arrogant man behind those doors had waltzed in and made changes already. Determined to be involved in all decision making from now on, she stormed into his office and sat down, uninvited. The direct approach would probably work best on a man like this. He glared at her while he talked on the phone. Swiveling in his chair, he turned to face the window.
“Tell me what you’re wearing,” he whispered into the phone.
Ewww, thought Polly. What the hell had she walked in on? She sat there uncomfortably. With her show of confidence of marching into the office, she didn’t want to sculk out now.
“That sounds sexy, baby. I can’t wait to see it later…when? When I finish here. I’m just going to sack some people and then whisk you off to Venice. Sound good? Yes, I can’t wait to see that underwear tonight.”
Polly rolled her eyes and coughed to remind him she was still in the room. He swiveled back to face her with the same frosty glare he gave her outside. Maybe his face permanently looked like that? It certainly detracted from his handsomeness. And she didn’t care if he thought of her as some sort of pushy pest but she had a job to do.