You are here: Products Masked Intentions by Aya DeAniege 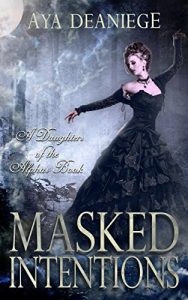 Rachel grew up in a world ripped apart by civil war. Alphas, genetically superior humans, wrested control of the western nations from the governing body twelve years ago. In the wake of the war, the Alphas struggled to remember the old traditions which had bound them to society. There are cracks in the new foundations, places for bad men to rule and for innocents to fall through.

After trying to care for her unstable mother, Rachel is picked up as a lawbreaker and slated for claiming or execution by an Alpha. In walked a stranger named Morgan. Unwashed, unshaven, flip flop wearing, unrefined Morgan, who all but kidnapped Rachel to take her home to his Master to be his breeder.

This world had existed for several years. While dabbling about with the possibility of writing a book, in walked Rachel. She’s not the typical companion for an Alpha, which was great because Morgan isn’t a typical Alpha. And while she’s told throughout about what Alphas do and do not do, Morgan just does what he does because he knows how far she can go.