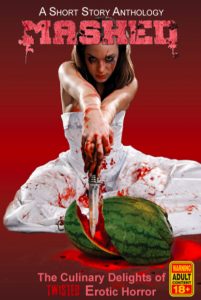 A Woman’s Corn – Two secret lovers with more secrets then either of them knew, brings about a special witches brew while the devil stews.

Charlies Chunky Munching Meat – A tale of obsession over a certain pink meat, gone too far.

Halloween Nosh – Two old-world vampires celebrating their love during the holidays with a special feast in the dungeon.

Biscuit : A Love Story – A baker’s dreams destroyed by a homeless man with unnatural hungers, leads to super-natural revenge.

Burnt Scrambled Eggs – What happens when your succubus lover stays over for breakfast?

The Disagreeable Dinner – Ever eaten a bad meal? Not like this one. Join us for this strange and hilarious case of food poisoning

The Henry Problem – Fruit as an aphrodisiac, exorcisms for dummies? All that and more!

The Wrath of the Buttery Bastard Taters – GMO’s are out of hand. A couples romantic dinner turns into a nightmare when their frankenfood decides to eat them instead.

The Care and Feeding of your Personal Demon – Be careful what you wish for. Sometimes, asking for a little help from down below can come with a lifetime of demented and hilarious torment.

P.A.C.D. The Kitchen of Tomorrow, Today! – Advancements in technology are often quickly perverted for sexual experimentation. Find out what happens when a couple’s cooling romance heats back up with a new kitchen appliance.

Toilet Manners – Marital impropriety leads to the strangest meal of a man’s life after a visit to a glory hole inside a fancy french restaurant.

The Stray – Is the story of a man’s lifelong dedication to helping strays. But, what happens when one gets a little upset when he announces he is moving away.

The Old Man in the Suit – Voodoo and baked goods outside a lesbian bar during Mardi Gras.

Do you like food? Sex? Horror? Humor? Then this book is for you!

Grivante is the publisher and author of one of the stories in MASHED. He is also known for his humorous action adventure horror series The Zee Brothers: Zombie Exterminators.

We received over 200 stories and chose the best of the best to titillate, amuse and sometimes, horrify.