You are here: Products Mary Lynne’s Dream: The Before Series Book Two by Jacy Sage 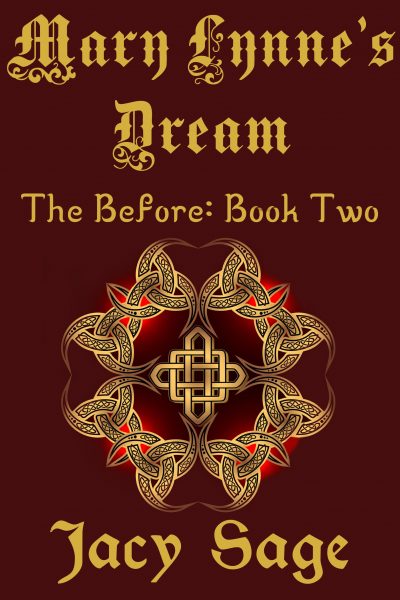 Are you like me? Is there nothing in your life that turned out the way you thought it would? Well, I decided it was time to get mine on track, and the best time and place to do that would be a vacation to a remote cabin in East Tennessee. I thought remote meant that I would be alone, for the soul-searching and planning. Unexpected guests, visions, and dreams, took me back to past lives- instead of forward to my future. Now it’s all up to me. Am I ready?

Jacy Sage, is the pen name for Joss Burnel. Retired from teaching and life coaching, the author is living the expat life in South America. Living a mystical life, she writes of magic and mayhem. Of characters who are seeking more; more meaning, more understanding and wisdom. Characters who discover the power of magic and whose hearts and minds are open to worlds, to dimensions beyond this one. Whether joining hands with one another in ceremony, conversing with those who came before, making love or healing, her characters live and move from a knowing that being here is a sacred journey.

She’d promised herself she would write in her journal every day and she sat at the kitchen table, doing just that. Maybe, at the end of the month, I’ll read back over it and see how far I’ve come. I hope so.
And so, she’d started her first journal entry with a question: What brought me to this point?
Everyone thinks I’ve come here, to this cabin, having left everything and everyone behind but the truth is, in the past eighteen months, everyone has left me behind. Like a used-up dishcloth or something.
First, it was Shane, her husband of 19 years, who walked away into a new life with a new family. Then mom lost her battle with cancer, and finally Kelsey moved across the country for her new job. The only thing that’s stayed the same is the job she hates. Last month when a co-worker asked her what she was doing for her four weeks vacation this year, it felt like a hole opened beneath her and she began to fall into it, feeling that there was no bottom, no light down there. With a quick gasp, she pulled back from the edge and announced, just like that other time, when she turned twenty-one, quick and brash, “I’m going away where no one can find me”. People around her laughed a bit nervously and turned back to their desks not wanting to ask or to know what that was about.
That night she’d gone online, looking for a place where she could be alone. There was within her a force, almost beyond her control, driving her towards this period of exile. There, on Craigslist she saw the advertisement: isolated cabin, has running water, wood stove, and outhouse. No electricity. Suitable for hermit. She laughed and figured it was a joke but fired off an email before she could talk herself out of it. The next morning, she found a reply in her inbox: No, it’s not a joke. This cabin was owned by my uncle who used it during hunting season. It’s dry and warm and I thought maybe a writer, or someone like that, might like to rent it for a while. If you’re interested, it’s yours for the month. The fee was beyond reasonable, and the cabin was within a couple hours drive of her apartment in Roanoke, VA. Mary had replied quickly “it’s exactly what I’m looking for”. She sent the rent for the month via PayPal, and the keys with a detailed map arrived in the mail the next week.
She’d taped together some of the boxes that she had used when moving into her apartment and began, every day after work, to throw things in. A quilt, wool socks, toilet paper, a couple of flashlights and extra batteries. As she drifted off to sleep each night she wondered if she’d truly lost her mind. She hadn’t told Kelsey there was no electricity but figured she’d go into town, once a week, and charge her phone at a restaurant somewhere. It would work out. Of course, it would.
Before leaving the apartment that morning, she left an envelope on the kitchen table. Inside was a copy of the map where the cabin was located, the name and email address of the owner, Kelsey’s contact information a handwritten will leaving everything to her daughter should she die or disappear and a handwritten note telling Kelsey she loved her and that she was the best part of her heart.
She’d loaded the car up, stopped for gas on the way and picked up more canned food along with some fresh fruit and vegetables to last a few days. No electricity means no refrigeration, so she’d had to think about what she would eat for the month that would last and wouldn’t go bad. She drove in silence. The radio seemed so loud and it tired her to hear advertising and news. She so wanted peace in her life, right this moment, on the drive to this cabin which may or may not be her salvation. Don’t think too much, she kept repeating to herself, just do this, just get there. You’ll be fine, you’ll be fine, and if you’re not, well, who the hell cares? Just drive, just get there.
She’d arrived in plenty of time to unpack the car and get settled in and to check out the outhouse. Outhouse, she hadn’t seen the inside of one of those since a camping trip before Kelsey was born. This one turned out to be pleasantly clean and had a window with a screen in it on either side. The cabin was clean, the mattress didn’t have any stains on it and she contented herself with that. It’s only a month, and I’m not here for a five-star vacation, anyway.
Why am I here, really? The question nagged at her as she went inside, put fresh sheets on the bed and covered it with her grandmother’s old quilt. As she plumped the pillow, she held it to her breast for a moment and as she did, the tears came. She sank slowly to the edge of the bed, hugging the pillow to her and cried. What the hell am I doing here? Maybe Kelsey is right and this is just a mid-life crisis of some kind.
Persisting with her journal writing, she’d copied down Socrates’ words, the unexamined life is not worth living. It made her feel she was in good company.

Mary curled up on her side, still hugging the pillow and fell into a restless sleep. Stirring, a few hours later, she woke up to a pale moonlight shining in the window on the wall beside the bed and for a moment, she felt that, somehow, someone was reaching out to tell her things would be okay.
As she stood up and smoothed back the quilt and arranged the pillow at the head of the bed, she was glad she’d brought a few battery-operated lamps and she turned one on before venturing over to the small wooden table where she had left some bread and jam and a jar of her favorite peanut butter. She made a bed of crumpled up newsprint in the bottom of the wood stove, put on some kindling and lit the paper. The fire caught quickly, and she added in a couple of small logs. Funny how the skills from those long ago camping trips were coming back so easily. She opened up a can of iced tea, smothered her bread with peanut butter and the homemade strawberry jam her friend Sally had brought over the other day and opened up her grandmother’s journal.
After her mother had died, Mary Lynne had found the journal at the bottom of one of the dresser drawers in her mother’s bedroom. She didn’t even know her grandmother had written a journal, and was delighted to see pages of musings and poetry within. She’d started to read and had ended up sobbing uncontrollably. Remembering Nana, so soon after her mother’s death, was just too much. Too much sorrow, too much loss and she’d felt adrift, without anyone left to run to. She’d packed the journal in with a few things she meant to keep and had moved that over to her apartment. A couple of weeks ago, as she was lying in bed, waiting for sleep to claim her, she’d remembered the journal and decided she would take it with her for this month away. Somehow, she hoped there might be some wisdom from a woman who’d died when Mary Lynne was a little girl.
She opened the book at random and read:
Like a leaf blowing on the wind,
the days of my life seem to flutter by
and I am left wondering where I’m going
and where might I land.

Mary Lynne gasped aloud, finding solace somehow, in knowing that she wasn’t the first in her family to wonder about who she was or who she was supposed to be. Raising her eyes to the ceiling, she spoke to her long-gone grandmother “somehow I knew you might understand”. As she spoke, she remembered clearly being four years old. She and Nana were having pretend tea at the little white table that Nana had at her house, just for Mary Lynne she’d always said. The two of them sat with tiny plastic tea cups filled with diluted tea from Nana’s teapot and ate biscuits and jam together, giggling when some jam fell off Nana’s toast onto her lap. Nana had such a beautiful laugh and Mary Lynne had loved how her eyes would crinkle up and her breasts would shake when she laughed.
After a quick trip to the outhouse, Mary Lynne made sure the fire in the stove was banked, and crawled back into bed. Maybe now that her stomach had food in it, she would sleep through the night. As she drifted off to sleep, she could hear the words of an old hymn from Sunday School “I will never forget you my people, I have carved you on the palm of my hand, I will never forget you, I will not leave you orphaned, I will never forget my own.” She hoped that was true, that whatever the source of that, whoever it was who called her name in the night, knew her and would help her find the woman that she hoped lived within her.

Be the first to review “Mary Lynne’s Dream: The Before Series Book Two by Jacy Sage” Cancel reply