You are here: Products Marrying the Billionaire by Allie Winters 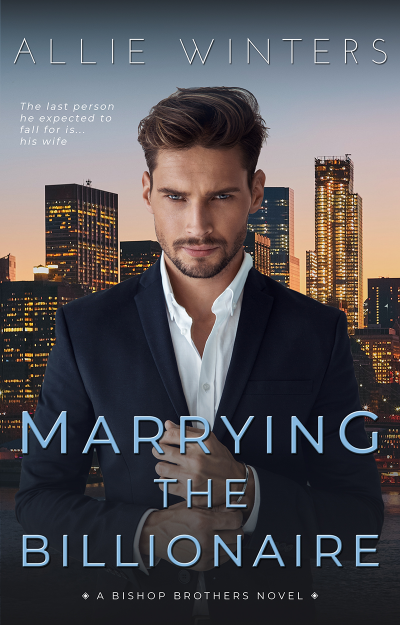 Marrying the Billionaire by Allie Winters

-Serena-
Marrying the man of your dreams after crushing on him for the last decade should be cause for celebration. So why am I crying alone in the honeymoon suite on my wedding night? Because there’s just one problem – it’s a fake marriage. Purely for appearances as part of a business deal between our fathers’ companies.
But I can’t sit idly by pretending this is only a platonic relationship, especially as sparks begin to fly between us. So what will I have to do to convince my stoic Prince Charming I want him for real? And what will I risk along the way?

-Archer-
The plan is simple – act like a husband in love publicly after I foolishly got myself involved in this fake marriage, and behind closed doors keep things separate. But the longer we continue this charade attending events and staging selfies, the more I’m unsure what’s fake and what’s not, especially when things start to heat up in private.
As the successor to my father’s billion dollar company, work has been my life. Focusing on my job has never been harder, though, when there’s a temptress living in my guest bedroom. What are the chances this business deal of a marriage could turn into the real thing? The last person I ever expected to fall for is… my wife.

Allie is the author of the Suncoast University series, the Bishop Brothers series, and the upcoming Lessons Learned series. She lives in sunny Florida with her husband, daughter, and two cats. A librarian by day, she spends her nights writing happily ever afters.

I loved the idea of writing about three brothers who, despite coming from a wealthy family, still have relatable problems. This book follows two characters first introduced in another book of mine, so it was satisfying to explore their characters more and have them find their happily ever after. I love a grumpy/sunshine pairing where one character starts out guarded and stiff, and eventually has to let the other one in and form a deep connection because of how persistent and positive their partner is, and that's how Serena and Archer are in this novel.