You are here: Products Married on the Oregon Trail by Bethany Hauck 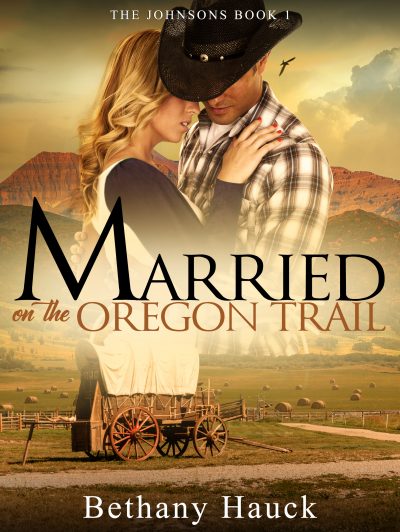 Married on the Oregon Trail by Bethany Hauck

Kenny Johnson’s life takes a bad turn when his parents and fiance’ are killed in a wagon accident. As the oldest of five, he feels it’s his responsibility to take care of his younger siblings. With the threat of Civil War looming, he decides to leave Kentucky and take them with him west, on the Oregon Trail.
Callie Fisher didn’t want to leave her home and friends in North Carolina, but her Mama and Papa left her no choice. She’ll go with them, but she’ll make sure they know how miserable and angry she is about their decision the whole way there.
Kenny and Callie find they get along well and strike up a quick friendship on the trail. The two families find they travel well and enjoy spending time together, except when Callie is giving her parents a hard time. Kenny warns her repeatedly about her behavior. Callie isn’t too worried about his warnings, until she pushes him too far, and ends up over his knee and then married to him.
Can the two get to know each other and turn a friendship into a loving marriage?

I love historical fiction and I love a good spanking story, but I've found that many times the spanking overshadows the story being told. I like the story to still be good with some good steamy chapters and some loving discipline. That's how I write my stories.