You are here: Products Married Lust Collection by Cordelia Winters 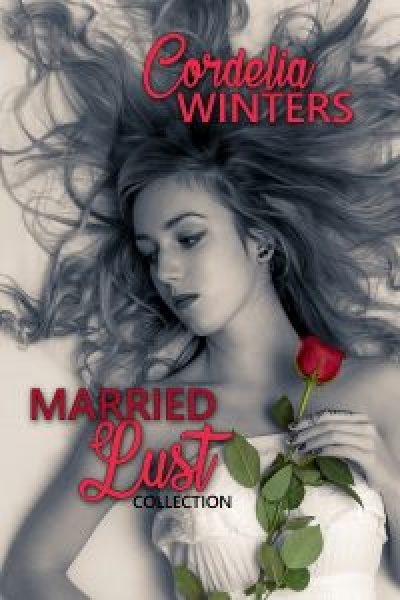 Robbie rolled her over onto her back, his hand sliding along her skin again, igniting her nerves, making her nipples stand at careful, rapt attention. His fingers slipped down between her legs, dipping inside of her with a press that shivered through her body.
Ava tipped her head back against the thick rug, a breathy sigh escaping her as Robbie eased slowly down her body, landing little kisses along her glowing skin. He lingered at her bare breasts, gently tugging each nipple into the wet heat of his mouth, making tingles zip through her skin. His hands smoothed down her sides and pressed into the soft of her thighs, parting them with ease. When he worked his way down her stomach, pulling the taut skin into his mouth with a gentle nip, she dug her toes into the fuzzy rug, her hands in his hair.
She bit her lip when he kissed her wet, pillowy flesh, his tongue pressing into her clit with a soft flick. Ava lifted up and watched as his head worked slowly between her legs, his tongue caressing her slowly, deeply, unhurriedly.
She sank back against the floor, tipping her head back, biting down on her lower lip as she grinned at the ceiling of the cabin. Her fingers dug into his hair, and clasped onto the thick rug beneath her. Her hips moved in little rolls with each flick of Robbie’s tongue.
“Don’t stop, baby…” she sighed, lifting her hips as fingers found her dripping center and skimmed along her g-spot. Her head tipped back as his tongue slowly traced patient circles along her clitoris, sending her pulse skyrocketing as pleasure raced along her nerves.
The air was filled with the sound of her breathy moans, Robbie’s deep, pleased rumble, the pop and crackle of the fire, and the distant hiss of the snow and sigh of the wind through the pines. Pleasure rose and fell within her, building to a warm, wet crescendo that cascaded along her skin, forcing a gasp out of her lips as her pussy clenched on his fingers.
Her body bowed up off of the floor for a moment, all of her being focused on the lap of Robbie’s tongue against her wet pussy. She came with a pulsating spasm deep in her cunt, her cry a hoarse, garbled exclamation of his name.
Robbie eased his fingers out of her as she slowly relaxed down onto the rug again, letting out a tight exhale. Robbie gently kissed her inner thighs over and over again, igniting another, deeper ache. She reached out and grasped him, pulling him back up the length of her body, and curling her legs around his hips.
Robbie’s grin was wet as he lowered his delicious mouth to hers. She drew him down against her, kissing him as her arms encircled his shoulders. She felt his hard cock nudge against her stomach and felt another flush break out over her skin, heating her body like an inferno.
They’d just made love a few minutes ago and he was still hard for her.