You are here: Products Marriage Under Fire by Jacki Delecki 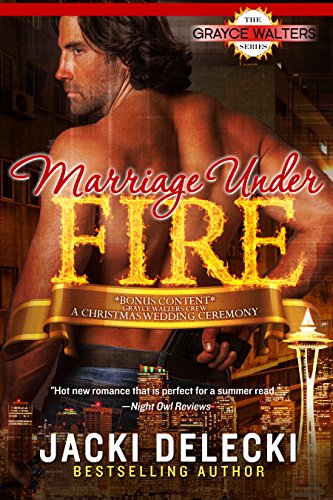 Marriage Under Fire by Jacki Delecki

Marine veteran Maddy Jeffers never expected her most demanding mission would come off the battlefield. Ordered to infiltrate a Seattle terrorist cell, she must pose as wife to Major Hunter Hines. The role feels all too real when she falls for the rugged, macho Marine. As danger heats up, they must walk a narrow path between passion and survival.

Why an animal acupuncturist instead of an ass-kicking heroine? I've asked myself that question many times as I wrote An Inner Fire. How did healing animals prepare Grayce Walters with the skills to solve crimes and protect a macho, hunky fire investigator?

Maybe I've been watching too many super heroine movies but I wanted to show my heroine's strength coming from her inner force. There are many different kinds of power and I wanted to emphasize the feminine side. The part of the human brain labelled as feminine because it relies on intuition.

Grayce uses her intuitive ability to heal animals. Is there any more beautiful or potent force? I wanted to celebrate the illusive power in people who listen and heal when we or our pets are ill. Not so easy to write a strength that we can recognize but when written can easily become cliched.

I always planned to write the book as romantic suspense since I love suspense and a crime to be solved. But how to link Grayce to a crime and then how to have her actively involved in solving the mystery? The answer is obvious–through a dog, a very special dog. Mitzi, is a standard French poodle who just happens to belong to the logical fire investigator.

Grayce and Mitzi bond with a common goal: protect Davis who is oblivious to the danger and can't imagine protection from a 90 pound woman and 100 pound dog.

With her pelvis thrust forward by her three-inch, knockoff designer heels, she countered her absurd posture by throwing back her shoulders. Since she was on the carpet, she might as well make it a Hollywood red carpet. Placing each foot very firmly and carefully, she managed to avoid teetering and made her way down the silent, sterile hallway of Seattle’s Henry Jackson Federal Building. The gunmetal gray walls and the Pine-Sol smell of a moldering, uncaring bureaucracy took her right back to her years as a foster child—in another government building, her future in question again.

Instructed to report out of uniform, she had been in a major quandary. Should she arrive dressed as the ecoterrorist she’d been posing as during her last undercover assignment to make it easier for them to reprimand her? Or should she look like any other office worker?

Major Hunter Hines, her partner on the assignment, had texted her to report at 20:00 to JFB.

The man could have given her a heads-up about what she faced; Marines took care of their own. Of course, Major Hunter Hines wouldn’t allow anything like human emotions or the dangers of that particular assignment to affect his report.

Speak of the devil, there was Hunter, waiting in front of the glass door to the FBI office. She surreptitiously dried her sweaty palms on her tight black dress and added a swagger to her slow, agonizing walk. No way would she admit, even under the threat of torture, that her killer shoes were killing her.

His dark, piercing eyes studied her every step. Did she imagine it, or had his Marine posture stiffened and his dark olive skin flushed when he saw her? Perhaps she wouldn’t be the only one to suffer today.

Dressed in a dark suit with an open, oxford-blue shirt, long, inky black hair brushing the collar, he looked the part of a billionaire playboy or techie mogul—the cold devil looked mighty good. She tried to ignore the fact that he was sexy as hell and remember he was a pain in the ass.

“What the—” His eyes narrowed, and she waited to hear the censure in his voice. “You don’t look like a Marine.”

What was a Marine working undercover supposed to look like? And why was it always an issue for a woman, but never a man? He didn’t look like a Marine today, either.

The young saleswoman at Macy’s told her this was an office dress. How would Maddy know what women wore to their jobs? She had never worked in an office and hoped to God she never would.

Her chin hitched up an inch. She was immune to his snide, unanswerable remarks. “Good morning, sir. My instructions were to report out of uniform.” No matter what she wore, she was a Marine, through and through. “I’m blending in.”

“Blending in? You call that sexy getup blending in?”

She looked up at him with her best innocent face. “You think it’s sexy?”

She pulled at the snug dress riding partway up her thighs.

He watched her movement with his usual eagle eye focus. She didn’t miss the hitch in his breath and the way his muscular throat rippled when he swallowed. “Think what?”

“If I’m going to be reprimanded in front of the FBI, I might as well look good.”

“Reprimanded? Why would you think you that?”

Because he was a precision machine who did everything by the book. She could envision how he recounted—in painstaking detail—her failure to identify the ecoterrorist who had planned to blow up Seattle’s waterfront.

“Didn’t you report that it was Sergeant Welby and his dog, Talley, who discovered the bomb?”

If this was one of his tests to prove his power over her, she wouldn’t give him any satisfaction. She’d take it square on the chin. She had used attitude to get her through a lot of dicey moments in her past.

“You could’ve been killed,” he continued.

She almost fell off her high heels. She scrutinized his face, looking to see some hint of sarcasm. Hunter almost sounded like he cared. He kept her locked with his intense gaze, as if he wanted all her secrets. She had a shitload, but no one was privy to them.

“I thought we were meeting with the FBI agents to review the bombing.” She wasn’t about to reveal her misguided fears about the meeting. Why belabor her screw-up when he was being almost nice.

“My orders came directly from Colonel Dawson. You and I are to report to the FBI office. And, like you, I have no idea what this is about. I thought I was headed back to Camp Pendleton.”

He opened the door to the office. “Shall we go in and find out?”