You are here: Products Marriage before Death by Uvi Poznansky 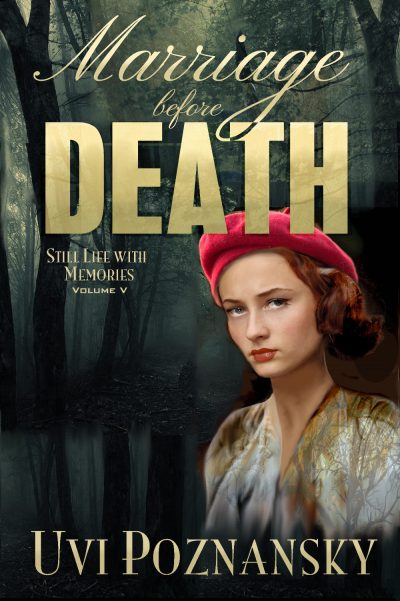 Marriage before Death by Uvi Poznansky

After D-Day, her photograph appears on the most-wanted Nazi propaganda posters. Who is the girl with the red beret? She reminds Lenny of Natasha, but no, that cannot be. Why does Rochelle step into the courtroom when he is lead by SS soldiers to the gallows? At the risk of being found out as a French Resistance fighter, what makes her propose marriage to a condemned man?

Uvi Poznansky is a bestselling, award-winning author of 26 books, a poet and an artist. “I paint with my pen,” she says, “and write with my paintbrush.” She received a Fellowship grant and a Teaching Assistantship from the Architecture department at Rensselaer Polytechnic Institute, where she earned her M.A. in Architecture. Then, taking a sharp turn in her education, she earned her M.S. degree in Computer Science from the University of Michigan.

Uvi writes across a variety of genres: Literary fiction, historical fiction, romance, romantic suspense, spy thrillers, biblical fiction, poetry, horror, and children’s books. Thanks to the readers who love the romance novels in her boxed set, A Touch of Passion, is the 2016 WINNER of The Romance Reviews Readers' Choice Awards.

Up until this moment I had entertained the hope that she might have had some secret plan to save me. My despair had compelled me to believe it.
Coming here in disguise—with that new, flower-laden hat and its little veil that changed her looks so much—showed me that Rochelle was fearless, especially at a time when she was wanted dead-or-alive. To deserve such notoriety, she must have forged some connections with French Resistance fighters, right? If so, couldn’t she pull some strings with them? Did they follow her to this place? Were they waiting in the wings to get me out of here, out of the hands of my captors?
I recalled old western movies, which I used to watch with my dad and Uncle Shmeel back in my childhood. Closing my eyes I could feel the warmth, sitting in-between them in the darkened movie theatre. I could just see the silver screen. Up there was the victim, his larger-than-life face utterly pale as the noose was beginning to tighten around his neck.
At that very moment, my heart raced. Uncle Shmeel would put his arm around my shoulder. “Don’t you worry, Lenny boy!” he would whisper, trying not to disturb the spectators around us. “Listen! Can you hear the hooves of horses, galloping?”
“Uncle Shmeel,” I would whisper back, “how can I hear anything? This is a silent movie!”
“Oh, but you can hear it,” he would reply, “inside your mind, inside your heart.”
And my dad would assure me, “Relief is on the way, Lenny boy! The cowboys are coming, any moment now!”
With that glimmer of hope I imagined myself now, just like that actor, standing under the gallows, hoping for a miracle. The rescue scene, exploding with a blaze of bullets, was sure to come, because my dad and Uncle Shmeel had promised it, because the plot had demanded it, and because how would the story capture your heart without the must-have happy end?
Yes. The moment was almost here. I had to believe it, then and now.

But as soon as Rochelle uttered the words Marriage before Death, my hope crumbled. Was that all she was here for, merely to arrange a simple matter of bureaucracy?
Indeed, an official marriage license with a stamp of approval from German authorities might help her save face with other people, now that she was pregnant. But then, what about me? What about my life? Did she care nothing for me?
In my distress I stopped listening to the exchange that followed between her and the SS officer. I caught only a few sentences, and even those ended up being quite hazy in my mind. As far as I could tell, Rochelle explained the details of her request in terms of some obscure article in French law, which permitted marriage on the eve of death, or even in its wake.
Apparently, it had been practiced in France ever since the Great War. If a soldier had made known his intent to marry, then his girlfriend could use this article—even after his demise—to legitimize her pregnancy. As a result, she would become simultaneously a bride and a war widow.
But what about that glorious blaze of bullets? Was it about to happen for me? Or else, was it merely a laughable delusion?
I could not bear looking at Rochelle smiling, ever so sweetly, at the SS officer and crossing her legs one way, then another to capture his attention. The excruciatingly boring, lengthy conversation between them sounded quite surreal, not only to me but to the other victims still here, still waiting to be sentenced.
Standing left and right of me, my two cellmates seemed to be in a daze. I wanted them to snap out of it. They should appreciate—should they not?—how the selection process had come to a grind thanks to this convoluted matter of nuptials, which required expertise in laws relating to marriage as well as inheritance statutes.
At one point, the French collaborator stopped scratching his head in an attempt to recall where he had met her. Perhaps to prove his clerical skills, he suggested how to conduct the application procedure so the marriage would take hold, legally speaking, and what should be done with the lucky groom—namely, me—before proceeding, as planned, with the execution.
I was stunned. In vain did I try to catch her eye. Save me, I cried inside. Save me now!

At long last, the SS officer glanced at his watch and grumbled, “Fine, mademoiselle. I don’t have time to think about all this right now. It’s getting late, and I have my orders. I must move my forces, without delay, back to Paris—”
“Oh!” said Rochelle. “Paris! I know the city—I was born there! Could I join you, as soon as this matter is finally put to rest?”
“Would you?” he asked, with a lusty glint in his eye.
Batting her eyelashes she said, in an intimate, velvety tone, “But of course, Herr Müller. I am so grateful to you for saving something that is important to me.”
“Which is what?”
“My honor.”
“Ach, what a charmer you are!” he said, then glanced at his watch once again. “No more executions today. We must be getting ready. Quick! Schnell! It’s a long travel.”
“I understand. Schnell.”
“Meanwhile,” he said, “prepare the documents to register your marriage in my office. Can you do it now?”
“Oh sure,” she said, in a manner of parting. “That would be my pleasure.”
The SS officer took her hand with a gentlemanly flair. Then, nearly drooling, he kissed it.
And as she started walking away down the corridor, he turned his attention to me and could not help but ask, cynically, “You understand, don’t you, what is to happen here?”
The only way for me to resist him was by remaining silent.
“Dumber than dirt,” he stressed, with the full weight of his cruelty. “Don’t you get it? Everyone here is jealous of you! Ach, such a nobody, getting married to the most beautiful woman in this entire land!”
I wanted to grab him by the throat, but knew I would be shot well before getting anywhere near enough to try, to wring the life out of him. All I could do was bite my lips and give him the hostility in my gaze.
He spat in my direction.
“Congratulations, Dummkopf!” he sneered. “Prepare yourself. Before this day is over, you will get just what you deserve: a ring on your finger—and a noose around your neck!”