You are here: Products Marriage and the Mermaid by Louise CUsack 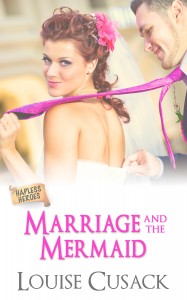 Marriage and the Mermaid by Louise CUsack

Balthazar Wilson wants nothing more than to be married with children, but he can’t seem to find Miss Right. A visit to his widower father at the Wilson family’s historical homestead in coastal Queensland, however, quickly proves to Baz that he has more things to worry about than his own happily ever after! His wealthy father’s eccentric behavior could be dementia, an innocent young blonde with no past washes up on their isolated beach looking for sex, the new cleaning lady is a kleptomaniac, an Internet scammer turns up with a gun to steal Baz’s inheritance, and the local cop thinks the blonde is a killer mermaid. When Baz’s ex–colleague Wynne Malone arrives to charm him, Baz isn’t sure if he wants to kiss her or have a mental breakdown.

Read this full length novel to find out if Baz does finally ‘get the girl’, and who survives that fateful weekend at Saltwood Manor.

Louise has been published by Simon & Schuster, Harper Collins and Pan Macmillan. She writes about intrepid women entering worlds that are new and strange to them – Strangers in Strange Lands – whether that’s an everyday woman from our world traversing a portal into a sepia kingdom, an amorous mermaid stranded on dry land, or a reclusive oyster farmer who must face the modern world when a geek arrives on her doorstep. Louise also works with computer game companies to develop fantasy and sci fi world-building. As an avid reader, however, her first love will always be books.

I live by the ocean and have long been fascinated by the idea of what’s beneath the surface, looking out at us when we can’t see it/them. I think about that every day while I walk the esplanade. All that wondering mixed up in my mind with the idea of a poor little rich boy who’s romantically challenged, and who can’t see that the perfect girl is right in front of him! I had SO much fun writing this book, laughing, crying and sighing with the characters as they bumbled from one disaster to the next. And I was so very glad when each of them found their happily-ever-after, although not with the person you’d expect!