You are here: Products MANGROVES AND MONSTERS (The Stolen Nickel Series, #2) by Sharon Cupp Pennington 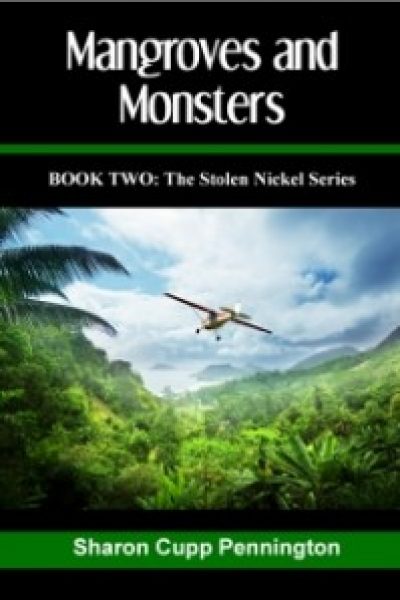 In this sequel to Hoodoo Money, Charlie Cooper is a reluctant teacher by day and broken-hearted wanderer by night – and a man desperately in love with a dead woman. But is Angeline St. Cyr really dead? The supermodel fell victim to an auto-pedestrian accident in New Orleans. Police reports and medical records substantiate the severity of her injuries. Cosmetics mogul Mathieu Fournier, her former boss, orchestrated a cremation and memorial service. The paparazzi swarmed celebrity attendees. Fans mourned.

Call it gut instinct, call it what you will, but Cooper is convinced Angeline’s death was an elaborate scheme Fournier sold to the world. He isn’t buying it, nor is his heart. A tenuous lead draws him to the Caribbean island of Jacqueme Dominique. Only he isn’t alone in his quest. With the unsolicited help of Angeline’s brothers, Nick and Brent, and by chasing his dream of rekindled love, Cooper becomes embroiled in murder, treachery and abduction at the hands of his old nemesis Willem Voorhees – a merciless killer.

For five long years Cooper’s love survived while he searched for Angeline. Will finding her cost him his life?

Sharon Cupp Pennington’s short stories have appeared in numerous online and print venues, with anthology contributions to The Rocking Chair Reader in the Coming Home edition (2004) and Family Gatherings (2005), A Cup of Comfort for Weddings: Something Old, Something New (2007), and Good Old Days Magazine (March, 2007). Her debut novel, Hoodoo Money, and the second installment in The Stolen Nickel Series, Mangroves and Monsters, were released in second editions on September 21, 2013. She resides in Texas with her husband, Wayne, where she is currently working on her next novel.

Angeline St. Cyr. But the members of my writing group liked Angeline – particularly Angeline with Cooper – and were quite upset about her demise, so I had to find a way to resurrect her…thus MANGROVES AND MONSTERS. Of the two books published, it’s my favorite.

Brent dumped the canvas on the ground, almost had the snarled hammock untangled when the sky opened. Gray clouds snuffed the sun’s rays; rain peppered the landscape.
Great. More humidity.
His inherent St. Cyr stubbornness took over. After several tree-hugging tries, he slapped the end of the rope around the tree’s giant trunk and began tying off his hammock.
“What are you doing?”
He whirled at the sound of Kat’s raised voice.
Her face appeared ashen, her eyes round with something akin to panic in them.
He dropped the rope like a hot poker. “Hanging my hammock?”
She grabbed his arm, draggimg him after her as she broke into a run.
His foot caught in a twisted vine, and he tripped over tree roots protruding from the ground.
Kat hauled him up. “There’s a river ahead.”
They stumbled toward the overgrowth.
“What’d I do?” He ducked, and a low-hung branch grazed his cheek. As he raised his hand, he felt the ooze of blood.
She knocked his hand away. “Don’t touch your eyes.”
“Why are you so pissed?” He heard the sound of rushing water. They plunged forward.
“Manchioneel tree,” was all she said before shoving him into the icy river.
He came up sputtering and coughing. “Are you crazy?”
She dove in after him, shoving him under, massaging water into his hair, splashing it in his face and eyes. “I must be,” she shouted. “Taking someone as green as you into the bush.”
He swiped water from his face. “Tell me what I did”
“Show me your hands.” When he held them out, she turned them over, checking his palms and wrists, knuckles and fingertips. “You scared me, Flyover.”
“What is this?” he croaked. “Some backwoods initiation? Next thing I know a tribe of howling pygmies will jump out of the trees, yell “˜Gotcha!’ before they toss me in a cauldron of bubbling gunk.”
She extended her hand. “Give me your shirt.”
“I’m not takin’ my damn clothes off.”
“Now you get shy.” She pointed her finger at him and said, “Don’t move from this river. I’ll be right back.” She sloshed out of the water and tromped up the bank, slipping, sliding, shoes squishing. Sopping fabric clung to all the right places. “Shit!” was the last word he heard her say before she disappeared into the brush. When she returned, his skin had pimpled blue with goose bumps, and his chattering teeth sounded like Morse code. But he still stood in the waist-deep water.
She dumped a towel and blanket on dry ground. Gesturing to an outcrop of flat rock at the river’s edge, she popped the oversized towel in her hands. “Take your shirt off and sit there.”
He sat, unbuttoned his shirt, and shrugged out of it.
“The manchioneel tree is poisonous. Deadly poisonous.” She yanked the shirt from his hands and tossed it on the bank nearer the rushing water. “You don’t climb the manchioneel. You don’t touch it, sniff it, or go within a mile of it.” Squatting, she scrubbed his shirt on a large rock, and then beat the drenched fabric with a small branch. “You don’t pluck its leaves or eat its devilish apples.” She eyed him over her damp shoulder, still pounding. Anger heightened the Irish in her brogue. “Ya ever seen Snow White?” She didn’t give him the chance to answer. “That old wart-nosed crone doesn’t hold a candle to the wickedness in this tree. My da always said it’s the devil himself that’s rooted in the manchioneel.”
His shirt got dunked in the river. She lifted it and dunked again. “You don’t use the manchioneel’s branches for firewood, ever, and you sure as blazes don’t stand under it when it’s raining. Jesus, Joseph and Mary, Flyover! The manchioneel can blind you. It’ll blister the skin right off you. Give me your pants.”
Blistering skin, blindness?
Brent kicked off his shoes. He hopped on one foot, then the other, tugged off his socks, and shimmied out of his jeans. He handed them over, flinchng when Kat beat them on the rock the way she did his shirt. The woman had anger issues.
“What am I going to do with you?” She averted her eyes and extended her arm behind her.
Brent took the towel from her outstretched fingers, then a green army blanket. He sniffed. It smelled like hay . . . and chickens. He didn’t see any point in telling her the rain had stopped. She was river-drenched. Besides, the view of her bouncing breasts draped in thin, wet fabric wasn’t half bad.
She kept his socks but handed back his shoes. “Put these on so you don’t step on a snake on the way back to the plane. I’m going to lay our clothes in the sun. While we still have sun.”
Our clothes?
He wrapped the blanket tighter around him. “What will you wear?”

Be the first to review “MANGROVES AND MONSTERS (The Stolen Nickel Series, #2) by Sharon Cupp Pennington” Cancel reply