You are here: Products Man with Money by Debra J. Falasco 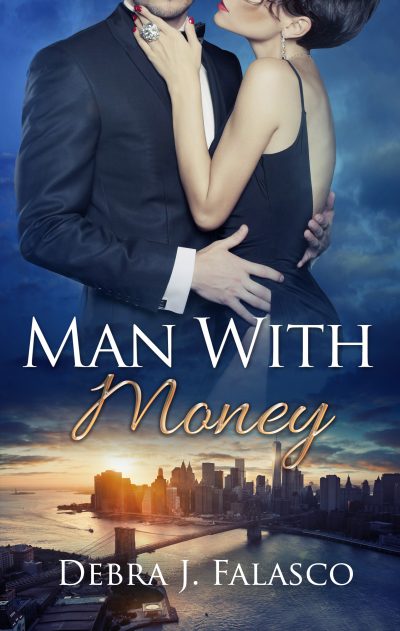 Handsome. Domineering. Passionate…
Tyler Murphy is a billionaire, a man with money. This ruthless businessman has everything money can buy except the woman of his dreams. And then she walked into his hotel.
Sweet. Sexy. Lonely…
Vivien Lee is Tyler’s ideal woman. And she’s a romance writer. She knows all the tricks, but she’s unable to resist Tyler’s charming disposition and alpha behavior. When they meet, the chemistry is instant. For two people who never thought they’d fall in love so quickly, Tyler and Vivien find themselves unable to walk away from each other. Vivien’s lack of confidence plays havoc on their budding relationship, but Tyler’s not letting her go. When tragedy strikes, they have only each other to lean on.Will Tyler earn Vivien’s love, or is a man with money destined to be alone?

Vintage romance with a modern twist – My name is Debra J. Falasco and I have been a writer for as long as I can remember, from short stories and poetry to college papers and expository writings. But my heart has always belonged to romance. After moving to Colorado from Texas, I met the man I was meant to be with. After marriage and one child, I left a long-term career to become a stay at home Mom. That was a dream come true but after two years, it was time to make another dream come true. I published my first book in August of 2019 and haven't stopped writing since!

This book was inspired by my own love of hot, strong, demanding alpha males who fall hard for that one woman who can bring him to his knees!

Be the first to review “Man with Money by Debra J. Falasco” Cancel reply