You are here: Products MAN UP ! BOY ! by KASEY TAYLOR 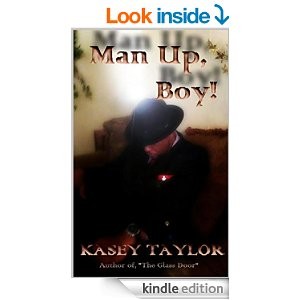 MAN UP ! BOY ! by KASEY TAYLOR

Fourteen year old Malik Fuller, nicknamed Tootie Boy, had many lessons to learn about growing up and hanging out with his seventeen year old brother Ty and his friends Corey Lee and Brent. Not only was Tootie Boy innocent to the fact that Ty and the guys were drinking, smoking and stealing, but he had no clue that his brother had a relationship Sasha, the most beautiful girl in the neighborhood, who Malik himself has loved all of his life.

Trouble came to light after Ty and Brent were arrested for stealing stereos from the boxcar of a parked train. Malik’s father Tyrone, the owner of a prominent construction business, made a back door deal with the judge to get Ty off, while Brent was sent away to the military instead of jail.

Later that year, armed with a basketball scholarship to Cornell University, Ty packed his bags and traded railroad tracks and swimming in the lake for the glitz and glamour of New York. As luck would have it, Ty just happened to be at an amateur runway model recruiting event and he was chosen to model for the renowned Western Jeans Company. Within two years, Ty’s good looks and southern charm had landed him the spot as top male model. His partner, Imani, Western’s top female model, introduced Ty to New York’s nightlife which in her world consisted of clubs, limo’s and fine dining.

One night in the well known, Club 99, Ty ran into his old friend Corey Lee Richardson, Brent’s cousin who was living in Harlem and conducting business at Club 99. Corey wasn’t in the modeling business though. Corey’s business was coke, girls and guns, but when Corey hooked up with Imani, his desire was to come up with enough illegal money to go straight.

No one could fathom the turns life would take for the guys in their new surroundings of the bright lights and street life of New York.

Kasey is currently employed with the Department of Human Services and is accepted and respected by her co-workers and clients. She has completed her novel titled, “The Glass Door” which has been accepted by PublishAmerica and is scheduled to be released very soon. She is currently working on two more un-named manuscripts.

THIS IS MY SECOND NOVEL AND I HAVE A LOVE FOR WRITING.

“Well, you know I don’t say that I’m sorry.” He grinned a mischievous grin.
“Oh Corey.” Imani sounded disgusted now. “You make me sick”
Before she could finish her sentence Corey interrupted.
“I won’t say I’m sorry, Imani, but I will show you that I am.” He reached into his pocket and pulled out one of the small plastic bags and held it up for Imani to see.
“Okay, you’re forgiven.” She responded abruptly, then, she hurried over and took the package from Corey’s hand.
As though Corey no longer existed, Imani walked away and sat down, totally naked, on the edge of the bed with the small bag of powder. She reached over and opened the nightstand drawer and pulled out a cut off straw to use to satisfy her habit.
Amazed by what he was seeing, Corey stood in the middle of the bedroom and continued to watch Imani. She seemed totally oblivious to everything around her except the small bag of joy powder and its companion, the cut off straw. She playfully dipped the straw in and out of the bag, then put the straw to her nostril and snorted heavily. Again, she dipped her straw into the bag and repeated the process in the other nostril.
It’s not a lot of difference between Imani and those other powder brained girls who’s working the streets for me when it come to that shit. Corey thought, realizing how much he hated seeing the power his product had on Imani.
Finally, he recognized that it was time to snap her out of her little world.
“Imani.” He yelled to get her attention. “You look like you making love to that shit.”
“Fuck you, Corey.” She snarled back at him then took another snort up her nostril.
“Come on, get dressed so we can go eat.” Corey was beginning to get frustrated now.
“I’ll get dressed, but I’m really not hungry right now.” Imani told Corey as she dug down into her suitcase and pulled out a bright blue thong and a matching bra.
“I hate to see you do that shit, Imani. Why don’t you try to get some help and get off that stuff?”
“That stuff, as you call it Corey,” Again, there was sarcasm in her voice. “is what keeps me slim and allows me to have enough energy to fulfill the needs of The Western Jeans company.” Imani sounded as if she was doing a commercial. “Besides, it wasn’t a problem for you when I was paying you for it.”
“Here we go.” Corey shook his head. “I just don’t want to see you mess yourself up Imani. You have so much going for you.”
Corey tried to reason with her as he’d done so many times before but this time he just threw up his hands and strolled over to the recliner and took as seat.
Realizing Corey’s frustration, Imani changed her tone.
“Let’s just drop it. I’m gonna get dressed and I’ll meet you downstairs in a few minutes.” Imani said solemnly.
She put on her bra, then slipped into the thong and pulled it as snugly as possible over her hips. She put on her shirt, her navy blue leather Western jeans outfit and her six-inch stiletto boots.
Okay, now the makeup and hair. She thought.
Once she felt everything was finished, Imani positioned herself in front of the full length mirror to see if she looked okay.
All the while, Corey watched anxiously as Imani made her transformation.
“Well now,” Imani stated with approval, “a walking billboard for Western Jeans. What do you think Corey?”
“As always, you look beautiful. You do Western Jeans Company justice. Now, let’s go.”

Be the first to review “MAN UP ! BOY ! by KASEY TAYLOR” Cancel reply