You are here: Products Malachy’s Unit by Claire Plaisted 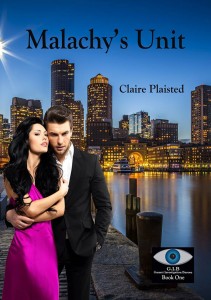 Since Malachy Garrett inherited his father’s investigations business, he has hated the boring daily grind of the office, yearning for the days long-past and the excitement and danger of cases now handed over to his staff.

Those agents include the beautiful but deadly Ana Belaruski, whose current case threatens to expose a skeleton of family secrets that could destroy Malachy and everything he and his father created.

As the mystery deepens, they find themselves in a desperate race to uncover a double agent in their midst. Will Malachy’s

feelings for Ana cloud his judgement, and will he risk everything for a woman who may or may not share the same

Writing novels of many genre, her writing has now taken over her life during the week. With ten books published as e-books and eight as paperbacks, Claire is getting ready to publish her first Regency novel, book six of GIB and another childrens story.

I had just finished writing an Regency Historical Romance book, which is still to be published. I decided I wanted to try and write something in the here and now. Malachy’s Unit is book one of a series. I am not sure what inspired me, I just let my fingers flow over the keyboard to see what happened.

Reaching his destination Malachy paid the cabbie and exited in front of Ana’s apartment. It seemed he couldn’t keep away. Running his hands through his hair tousling it, he sighed heavily. Entering the apartment building he approached the elevator. ‘Sod it,’ he muttered, calling it down. Soon Mal was standing outside Ana’s door listening to rock and roll making his lips curve, never imagining Ana listened to music of this kind. Knocking on the door, he waited patiently. The door flew back wide. A purple haired goddess wearing a short tangerine dress appeared; his jaw dropped in shock.
“W-who the hell are you?” He said once he found his voice.
The woman put her head to one side, smiling sweetly, “You must be Malachy, Ana told me about you.”
“Where’s Ana? Is everything all right?”
“Come on in,” she laughed with delight sashaying to the fridge, “would you like beer? My name’s Mirage. Ana’s fine she went away for a few days. Something about another modelling assignment,” she sighed in envy.
“Yes of course,” he murmured. “So you’re a neighbour?”
Passing him his beer, she replied, “No I’m an old friend from school.”
He raised an eyebrow; she didn’t fit what Malachy thought would be a friend of Ana’s. There again Ana always said she didn’t have any close friends. He’d have to ask her when she returned.
“Thanks for the beer. I thought I heard rock and roll, now seeing you it makes a bit more sense. I can’t imagine Ana listening to rock.”
“Classic rock is great music, wanna dance,” she grinned cheekily.
“No that’s okay thanks.” He said hurriedly, “I need to get going. I’ve other business to attend. Thanks for the beer.” Malachy left rather hurriedly the door closing quickly behind him. Ana kicked off her shoes pressing her back to the door slowly sliding down it until her bum hit the floor where she started to laugh hysterically, tears running down her face ruining her makeup. Taking a deep shuddering breath, she staggered to her feet stumbling across the dark blue carpet to her couch where she stretched out holding her stomach still weak from laughter. Groaning at her aching sides, she closed her eyes enjoying the music as it wafted over and around her.