You are here: Products Making Her His (A Singular Obsession Book 1) by Lucy Leroux 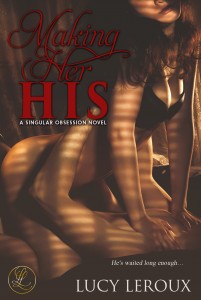 Making Her His (A Singular Obsession Book 1) by Lucy Leroux

For almost five years, Alex has had one obsession. Her name is Elynn.

Alex Hanas couldn’t believe that after so many years as a widower, his father was getting remarried. To make matters worse, the American gold digger had a kid—a daughter named Elynn. After months of avoiding it, Alex goes to brunch with every intention of giving his father’s new family the deep freeze. But he can’t pull it off with Elynn’s anxious green-grey eyes locked on him.

That was the day his life changed.

Four years later, Alex is as close to Elynn as a stepbrother can be. But that’s not enough for him. He wants more…and he’s done waiting.

Her ‘A Singular Obsession’ series is a combination of romance erotica and suspense that feature intertwining characters in their own stand-alone novels. Three are completed and additional four books are planned. Follow her on twitter @lucythenovelist or http://www.facebook.com/lucythenovelist or visit www.authorlucyleroux.com.

I got tired of erotica or romances that featured immature and unintelligent characters so I wrote my own! It was quickly followed by a second and a third book and now it’s a series! A Singular Obsession will feature six or seven books at completion.