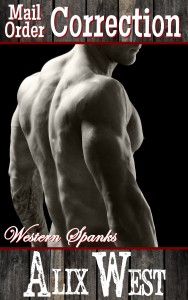 When Seth Kendal sends away for a Mail Order Bride, he insists that she know how to keep her man happy in bed. In his letter, he explicitly instructs his bride about this single, ironclad part of the bargain. His new wife, Emily, has never even kissed a man, but she’s too in love to let a little thing like that stop her. She heads west, hoping to convince him to keep her. Seth wastes no time in showing his innocent wife what he thinks of her naughty behavior.

The Western Spanks stories show a side of the Old West you probably didn’t know about, muscular, dominant, steadfast cowboys with younger, often sassy wives. Sparks fly when the hero corrects his sweetheart.

One of the Western Spanks stories will be free on Kindle each Thursday in July. Check out this link to get your free copy, http://www.amazon.com/Alix-West/e/B010TWTWYS.

Alix West lives with her family in the Wilds of Texas. She writes stories that feature innocent heroines who sass their men at every turn. The heroes are often older, always domineering and above all, protective of their women. The story lines are romantic, fun, sweet, and spicy.

It’s so enticing, when the stories play in my mind, my muse directing the action, and me, imperfectly, putting the words on paper. There’s nothing I’d rather do than write, and for some reason the muscular, dominant, sweet but protective cowboy keeps beckoning me, inviting me closer with his wicked smile and dark promises.

Scores of letters had gone back and forth between them over the months. In the beginning, the letters were formal. It wasn’t long, however, until the awkwardness passed and a playful exchange took its place. It started with him teasing her about her fear of the dark or of bugs. She’d responded with suggestions that he was uncouth and uncivilized, and that she needed to come to his aid, to remind him of how a gentleman addressed his beloved.
The memory of her words drew a low growl from him. She’d deceived him, and if anyone would be doing some reminding, it would be him.
“You wrote that you have two thousand acres,” she said, her tone shy and timid. “So I imagined a vast ranch, but I never expected such a fine home. If memory serves, you told me your father built it for your mother.”
“Yes, ma’am,” he drawled. “First two-story limestone house in the county. And the first with running water.”
She smiled. “The views of the rolling hills. I’ve never seen anything so pretty.”
“Glad you like it.”
He felt another hint of pride for the Kendal Ranch. He’d doubled the herd since his parents passed. He’d never thought about the house much, but it pleased him she approved. He knew from her letters that she worked hard, and although she appreciated fine things, it never sounded as if she expected them. All he’d wanted was to bring her to Texas and spoil her a little bit.
And get her into his bed. He wanted that, too.
“Marta told me she left our supper on the stove,” she said, drawing him from his heated thoughts.
“You hungry?”
She shook her head. “I thought you might be. I just want to take a bath and get out of these clothes.”
“That so?”
She pursed her lips. A slow flush of color bloomed across her cheeks.
The look affected him in a way he couldn’t have guessed. The hot lust he’d been holding back ignited. His cock hardened even more. He’d told her that they would take a few days to get to know each other, but since she’d misled him he felt no obligation to hold up his part of the bargain.
“I’ll help you with your bath.” He gestured towards his room. When she looked stricken and remained unmoving, he clasped her elbow and drew her up the stairs.
“I can manage on my own,” she said, with a nervous hitch. “I am, after all, an adult, despite what you might think.”
He couldn’t help the harsh bite of laughter that escaped his throat. The girl had some starch in her spine after all, and damn if it didn’t please him. Closing the door, he drew the bolt with a click that resounded through the room. Although there was no one in the house aside from the two of them, he wanted to make his intention clear. The sun had set so he lit a lamp and then opened the spigot. Hot water flowed out. The girl stood woodenly, her eyes flashing with anger.
He folded his arms over his chest. “Get undressed.”