You are here: Products Magic School U.S.A: Easy “A” by Li Chaka 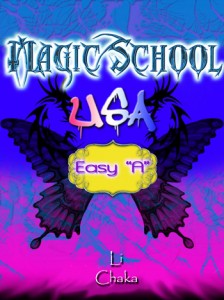 Richard “Vegas” Beltran is an underachiever. That’s bad for any student, but it’s especially bad when you go to a wizardry school. Black Magic is something to be taken very seriously, but Vegas has been caught smoking “eye of newt” in the boys’ bathroom, and all of his bubbling cauldrons contain ice and alcohol…

The principal, Professor Diaz, is ready to drop Vegas into a slower-paced magic class. But Vegas would rather die, Houdini-style, in a botched escape act than have to suffer through “remedial magic.”

After all, Vegas only came to Absolution Academy, school for the “Paranormal Sciences,” to learn a spell that would bring his girlfriend, Katherine, back from the DEAD.

Unfortunately, now that his tuition’s been paid, he finds that resurrecting the dead is an act of Godslaughter–a forbidden form of magic–and at Absolution Academy, an illegal activity.

Li Chaka is spends her time dreaming about drunken wizards, music obsessed necromancers and Bill Murray movies (Ghostbusters 2 being the FAV!). Sometimes she writes down these strange ideas just for her own enjoyment. Then she heard that some people actually make MONEY off of writing and selling their strange ideas. Lord have Mercy! Will wonders ever cease !? Magic School U.S.A is her first published book but it won’t be her last.

The joy of getting creating a good story.

Be the first to review “Magic School U.S.A: Easy “A” by Li Chaka” Cancel reply