You are here: Products Magic Hands by P.M. Fox 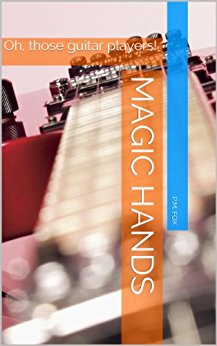 Sarah goes to a party reluctantly hosted by an old friend, running into her former boyfriend who she's had the best sex of her life with but the problem is, now she's engaged.

P.M Fox studied Creative Writing at the University of Minnesota and writes in several genres including fiction, screenplays, erotica and memoir.

I didn’t want to go to this party, at all . . . but it had been months since I had seen my friend Carla and her husband, Mike, so I decided to suit-up and show-up, as they say. The reason it had been a while since I’d seen them was because I broke with Mike’s best friend, Jesse.
Jesse . . . Jesse . . . Jesse the guitar player, both electric and acoustic. I have a weakness for that particular narcissism. The way they stand on stage, gripping the neck of their instrument, plucking the strings. I imagined them in the ecstasy of masturbating or stroking a woman’s leg while diddling her clit.
This graphic metaphor is the long way for me to say that Jesse and I connected on only one of four body intelligences; emotionally, mentally, and spiritually we were on different planets, but physically? We fucked and fought, fought and fucked until I was too exhausted to do anything anymore.
I walked into their house party, hoping in vain he wasn’t there, but he was . . . playing in their living room. Jesse strummed with Mike on bass and another guitar player, not nearly as talented. Jesse’s dirty blonde hair, hung over his eyes as his strong hands continued to strum and pluck. His tall, lanky stature always had the appeal of heroin chic. He didn’t use hard drugs but he drank, too much. Someone handed me a drink, my eyes were already glued to Jesse’s hands. Those magic hands that knew exactly what I like and when, how hard and how long . . .
I should mention that I’m engaged to a guy named Sam. We connect on those other three body intelligences but… let’s just say he doesn’t have magic hands. Carla made her way to me, already staggering. “Sarah!” She kissed my cheek. We both looked at the players. She giggled, “Look at all the cock out in the room!”
“Totally,” I responded as Jesse caught my eye. He smiled, that smile that instantly wet my panties. He watched my legs as I consciously hiked up my skirt. I knew this was trouble. I should definitely get out of there.
“Have you and Sam picked a date yet? Where is he tonight?” Carla asked.
“Huh?”
Carla giggled, “Jesse’s no good for you, remember?”
I set down my empty glass as I say, “Sam’s out of town on a business trip.”
“He never comes to parties with you.” Carla looked a little hurt but this is all me, I’ve tried to separate worlds as much as I can. “Do you have a wedding date yet?”
“We are planning on Valentine’s Day in a few months.”
“Ah, that’s so sweet I want to puke a little.” She hiccuped, “Actually, I just did!” She refilled our glasses. I saw where tonight was headed for her, total oblivion. I can’t blame her. She and Mike have been trying to have a baby for years. Meanwhile I’ve had a few pregnancy scares due to my recklessness, most of them with Jesse. I decided the kitchen was a safer place for me emotionally, dishing up food and replenishing ice etc. I hoped it was a bit cooler in the big kitchen too, away from the plugged-in amplifiers.

Be the first to review “Magic Hands by P.M. Fox” Cancel reply