You are here: Products Mafia: A Collection of Dark Love Stories by R.E. Saxton 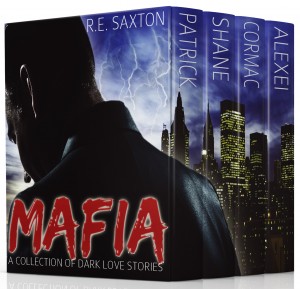 Mafia: A Collection of Dark Love Stories by R.E. Saxton

This four-book collection is just $0.99 for a limited time (or free to borrow with Kindle Unlimited).

Meet Patrick, Shane, Cormac, and Alexei. They’re an integral part of their city and intimately involved with the mafia. Only one thing can weaken such powerful men, and it comes in the feminine form of the women who bring them to their knees. If you don’t like possessive, over-the-top alphas with control issues, this might not be the collection for you. If you enjoy reading about alphas who fall crazily, desperately, and obsessively in love, prepare to meet these men of the Mafia.

Excerpt from “Patrick”:
Lauren grinned at Patrick. “I’m wearing clothes. I don’t consider this skinny-dipping, but if you prefer…?”
He scowled at her as he stretched and grabbed a towel, thrusting it at her with more force than necessary. “Cover yourself. You know who’s around?”
She made a big production of looking around them before settling her gaze back to him. “I only see you and me, Patrick. Is it you that you’re worried about?”
He took off his sunglasses, pushing them on top of his head. “There is staff around, and guards everywhere. Just because you can’t see them doesn’t mean they aren’t there. If you want to put on a whore show for everyone, I guess that’s your business.”
She flinched at the words, glaring at him. “It’s hardly a whore show.” Annoyed, she wrapped the towel around herself, and not because he’d insisted. She was just done giving him a free “whore” show, if he wanted to consider it that. Grumpy bastard.
“I don’t know what your problem is, Patrick, but you have to stop acting like my damn father. You’re not my dad.” She started to slip past him gracefully, determined to leave on that note. She glared down at him as she passed. “I don’t want another father. That’s not at all what I want from you.”
She’d barely made it another step before his hand fastened around her wrist, sending sparks of electricity up her arm and making her shiver. Seconds later, she was sprawled atop him, their faces inches apart. She caught her breath as her heart galloped in her ears. “What are you doing?”
“What are you doing?” He glared at her as he repeated her question. “This game you’re playing can get you in trouble.”
She didn’t know whether to go for innocent or to admit what she was doing. Hesitating, she licked her lips. “What kind of trouble?”
“The kind of trouble a young woman just starting out in life doesn’t want. Behave yourself.”
She rolled her eyes. “There you go acting like my father again, Patrick.” She poked him in the chest lightly with her fingertip. “You’re not my damned father.”
He shifted her suddenly, bringing the heat of her folds against the pressing arousal between his legs. “I know I’m not your father. But I’m still trying to do the right thing and look out for you. So I’d suggest you knock this off right now.”
She couldn’t resist circling her hips, rubbing against him and eliciting a groan from both of them. “Who’s to say you’re doing the right thing? Maybe this is the right thing.” For emphasis, she raised herself before rubbing down his length, wishing there weren’t swim clothes separating them.
He was clearly battling between anger and arousal. “Stop.”
The gruff command should have been intimidating, but all it did was turn her on. She could see his shell finally cracking, and she reveled in it. “No.” She mimicked his tone as she dry-humped him.
“Dammit, Lauren, this isn’t right.”

Be the first to review “Mafia: A Collection of Dark Love Stories by R.E. Saxton” Cancel reply