You are here: Products Made To Break Your Heart by Richard Fellinger 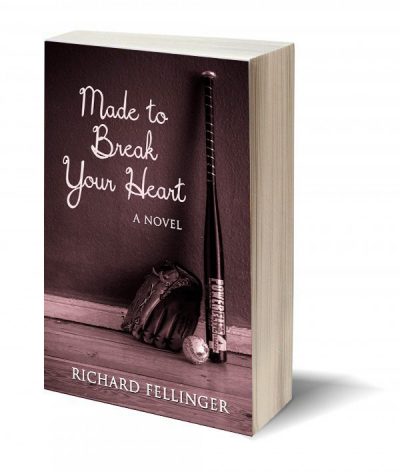 Made To Break Your Heart by Richard Fellinger

It’s 2008, and Nick Marhoffer is a stressed-out dad who finds himself flirting with thoughts of infidelity. While is job is being threatened by a crumbling economy, he is fraught with anxiety over his only son’s well-being. So when his son starts playing baseball, Nick becomes a rabid Little League dad who loses sight of what’s good in his life. After developing a crush on a gorgeous team mom, he can’t decide between her and his wife, then finds himself at risk of losing everything that is most important to him. This is a smart, sexy, and funny novel about bad breaks, bad decisions, and the long road of life.

Richard Fellinger is an award-winning short story writer, a former journalist, and a writing fellow at Elizabethtown College in Pennsylvania. His first book, a collection of short stories titled They Hover Over Us, won the Serena McDonald Kennedy Award for literary fiction. He graduated from the University of Pittsburgh and holds and MFA in Creative Writing from Wilkes University. He lives with his wife and son in Camp Hill, Pennsylvania.

Our Little Corner of the World

A week later, League Orientation Night. This was an annual get-together in mid-March when players and parents of the Misty Hill Little League crammed into a smelly school gym with the heat cranked up too high. We listened to Sam and the other league leaders speechify about things like what size bat to buy and how to play catch with your youngster — Step into your throws; don’t just stand there like you’re waiting for a bus — and then we were ordered to break into small groups to meet our teams.
My team was the Rockies, and the first person in our circle was Diet Coke Mom. Her son Carter had played T-ball with Wesley the previous year, and she was impossible to miss on the sidelines. She was in her mid-thirties, with sleek brown hair and full lips, and she always toted around a half-full bottle of Diet Coke. On this night, her lips were smacked with smoky crimson lipstick, and her gold hoop earrings were the size of golf balls. She wore a cashmere V-neck and tight jeans with a low-cut waist, the kind teenagers wear, with just a sliver of belly peeking out.
“I’m so glad you’re coaching this year,” she said to me, striking a pose with the bottle raised shoulder-high, wrapped in a feminine curl of her wrist. “You were so positive with the boys last year, and Carter really needs that.”
“Thanks, I’m excited about it myself.”
Never mind that Carter was a weak little ballplayer. I found myself excited about the fact that his mom would be at our games. I was, after all, a red-blooded male of a particular age — creeping toward forty, with young adulthood dead and gone and middle age lurking ahead. And as the years whooshed along, I was learning that the male ego never tires of the attention of a tantalizing woman, even if she’s just watching a guy point a boy toward second base.
I began my speech to the Rockies parents — practice times, rainout protocols, equipment needs. All the while, I felt like Diet Coke Mom was my only audience. She stood in the middle of the circle, one hand perched on Carter’s shoulder. She seemed to be hanging on my every word. Her brown hair and gold earrings sparkled in the light of the gym, and her whole face, with those full red lips, glowed. Yet I was also acutely aware of Marcy, with her strawberry blonde hair and those big hazel eyes that Wesley had inherited, standing beside me, practically rubbing elbows with me, one of her hands resting on Wesley’s shoulder. My head was a jumble as I tried addressing my new team while my eyes clung to one woman and some part of my brain flashed warnings that my wife’s finely tuned radar was on high alert. After laying out the expectations for concession-stand duty, I lost my train of thought and began stammering.
“The Rockies suck,” one of the Rockies said, interrupting me.
I didn’t know who said it, though the remark seemed to have come from the right side of our circle. So I looked right, glancing from one little face to another.
“The Rockies suck,” the boy said again, and this time I saw him. “I wanna be a Ranger.”
It seemed like the jaws of other parents in the circle dropped all at once.
He was a little rug rat — not your typical Misty Hill kid. His mom, a heavy woman in tight pants and baggy sweater, yanked his arm and scolded him. “Lance, don’t!”
“Now, now,” I said.
“I’m sorry,” the boy’s mom said. “Really sorry.”
I didn’t know what else to say. Should I get tough with the little punk? Discipline someone else’s kid? After all, I was the manager, and the other parents had already shown concern, with their jaws hanging down by their belts. But I also had to remember that these kids were so young, only seven or eight years old. So should I try something diplomatic, maybe tell the kid he and I would talk one-on-one afterward? Or just try to dismiss it with humor?
I froze. All I said was, “Okay.”
I stammered some more, then remembered I’d been discussing concession-stand duty. Rather than try to recall exactly where I’d left off, I told the group I’d send out an email with a schedule. When it was all over, and the Rockies and their parents began scattering, I asked Marcy how it went.
“Fine,” she said curtly, as Wesley left her side to run circles in the gym with other kids.
Marcy had a habit of scrunching her face when she was withholding the truth, and sure enough, she was scrunching now.
“Tell me the truth,” I said.
“Okay. It was a disaster.”
“Disaster?”
“Yeah, a disaster. Think about it. That one kid kept saying ‘sucks.’ He’s going to be a handful. And you should have said something more to him tonight, shown the parents you know how to discipline a kid like that. They want that.”
“Oh.”
“And what’s up between you and that skinny mom with the big earrings and the Diet Coke? Huh?”
“What do you mean?”
“You were looking right at her the whole time, like she was the only person in the room, and she looked back at you the same way.”
“You’re reading into that,” I said. “I think it’s just because she was standing in the middle.”
“Yeah, right,” she snorted.

Afterward, we filed out of the gym with the rest of the crowd but couldn’t go anywhere — we were parked in. And I knew exactly who’d blocked us in. My neighbor, Rocco Spinelli, with his sleek black Audi.
Rocco was a South Philly guy who’d grown up on a little row-house street where creative parking was a tradition as old as the automobile itself, and he’d never broken himself of the habit. Besides, he was the kind of person who could get away with things that other people couldn’t. He was trim and good-looking, with bronze skin and a perfectly manicured black goatee, and was chief of staff to a state senator — not just any state senator, but the chairman of the Appropriations Committee. Rocco and his boss knew how to get their hands on things, namely money. Though technically just an aide, Rocco was largely responsible for state grants that had built, among other things, new dugouts and a snazzy new scoreboard at Misty Hill’s aging baseball field, and a whole extra field, complete with home-and-away bleachers, for the town’s growing soccer league. And not only did he enjoy the admiration of the entire town, he also had two beautiful children, a twelve-year-old ballplayer and a teenage daughter, though his daughter never seemed to interact with anyone outside of her household who wasn’t between the ages of fifteen and eighteen.
After we leaned against my two-door Honda Civic for several minutes waiting for Rocco to emerge from the gym, Marcy lost patience and decided to walk home. It was a four-block walk and relatively warm for mid-March, and she took Wesley with her while I waited. I could tell from the way she marched off that she was also still mad at me for my accidental bout of gawking, but I also knew she’d get over that soon enough. I didn’t think she was too ticked off at Rocco, though, because we were friends with the Spinellis and we’d grown used to those little inconveniences that came with the territory.
He was the last one out of the gym, wearing a shiny navy blue warm-up suit, carrying his clipboard comfortably under one arm. I figured he was coaching one of the twelve-year-old teams, because he always managed his son’s team. He saw me leaning against my car with my arms folded and cracked a guilty smile.
“Sorry about that, Nick,” Rocco said, digging into his pockets for his car keys. “I got here late, then had some extra details to attend to. This is Justin’s last year in Little League, so I want to make sure it’s a good one.”
“I see,” I said, in a tone that indicated I was accustomed to his antics.
“Where’s Wesley?” He clicked on his key ring and his car doors unlocked and the lights turned on.
“Marcy walked him home. They were tired of waiting for the asshole who parked us in.”
Rocco let out an unashamed little chuckle: “Sorry about that.”
“Where’s Justin?” I asked.
“Rode his skateboard home with a group of buddies. Heed my advice, my friend, and enjoy this whole experience while it lasts, because before you know it your son will be trying his best to get the hell away from you.”
Halfway across the parking lot, which was now nearly empty, a car horn honked. We both turned to see where it came from, and Rocco seemed to recognize the vehicle, a white Range Rover. I could see the silhouette of the one person inside, and it looked like a woman. Rocco held a finger in the air, a sign he’d be over in one minute.
“Everyone’s waiting on you tonight,” I said mockingly.
“I’ll move my car for you, and then I have to go see her. It’s one of the moms from my team. Nothing too important. Have a good one, old buddy.”
He moved his car, hopped out and jogged over to the Range Rover. I pulled out of my space and headed toward the quiet street. When I stopped at the street to check traffic, I glanced in my rearview mirror and saw Rocco lean into the open driver’s side window. I swear to God, I saw him kiss the woman inside.