You are here: Products M.A.D.E. Chronicles: The Ghost Indwelling by M. Nova 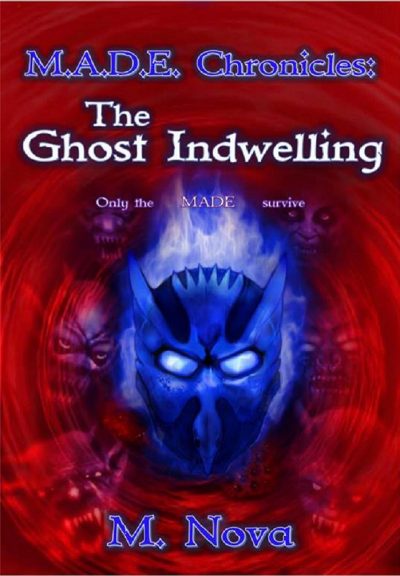 On the eve of his biggest score, JD, the leader of a vicious biker gang, stumbles upon something worth more than any priceless jewel, more precious than anything he had ever acquired or killed—a mysterious woman.

What he learns of her and the world around her is more magically mystifying than his greatest dream, yet beyond the horrors of his worst nightmare. He has found a woman believed to be the key to victory in a war that began before the dawn of humankind, between angels and demons.

Magnetically drawn to the mystery of one another from the moment their paths violently intersect, they must choose between good and evil, between aligning with or against a secret paranormal organization, Man and Angelic Defense Eternal, established to counteract the demonic forces of REALM.

Together, they learn of one another’s destiny, the purpose of their hearts, the song of their souls, and the supernatural potential that each possesses. But, can they help each other overcome the pains from heinously tragic pasts? Will they usher one another to experience the redeeming grace and powers to change their future?

In a world psychotically inhabited by feuding supernatural humans, angels, and demons — beasts, creatures, monsters of all sorts — they might just learn that love is the key to unlocking true superhuman powers that are necessary to alter not only their destinies, but all of humanity’s.

They were made for many things, but do they have what it takes to be MADE for war, made for love?

The "Real JD," Nova, is joyfully married to his Dovemate and best friend, author Cathy Nova.Every book he's written, he's dedicated to her, before they had ever met. He purposefully put his books out to the world to find his Dovemate/soulmate, and it worked, as Cathy found him through MADE's The Ghost Indwelling.

Authorities on destiny, through written and spoken words–and victorious living–Nova and Cathy wage war against all forms of darkness to turn victims to victors.

M.A.D.E. Chronicles: The Ghost indwelling and the rest of the 7+ books came to me after becoming published for my Garden of Apples Saga(about Adam and Eve in an alternate reality). All things angels, demons, monsters, mythology, legends, my own beastly creations, gods, magic, etc., inspired the basis around the most twisted, deepest love story I've ever written, filled with psychopathic action and adventure and something different with superheroes: men and women ACTUALLY treated equally in number and gifting, without forgetting the human condition differences between men and women. Oh, and the deeper that love or hate can go between two lovers can affect how superhuman they become together as one, or against each other.

M.A.D.E. Chronicles: The Ghost Indwelling is an insane romantic adventure mixing Urban Fantasy, Paranormal Romance, and Superheroes–a true victims to victors tale, lengthy with twists and turns and unforgettable story arcs that all tie into one literary soul. It's completely about destiny; no matter if someone has been abused, abandoned, rejected, used, sex-trafficked, a victim of body appearance or racism or sickness and disease, we ALL can rise up and stand victorious on our Mountain of Destiny in the end…if we choose to not lay down and die, but rise up and fight and fight and fight some more! Victory in one's destiny, and even love, won't come without warring for it. But it requires taking (the sometimes arduous) first step forward!

Be the first to review “M.A.D.E. Chronicles: The Ghost Indwelling by M. Nova” Cancel reply