You are here: Products Lust & Chastity by Faye Hall 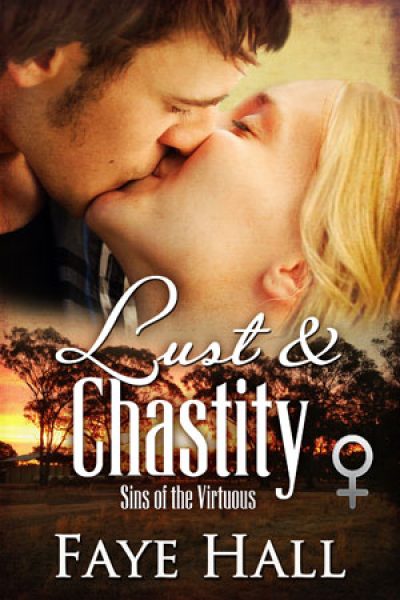 Would you surrender the pleasure of lust to become a lady of chastity?

Darien Avery followed Caitlyn Sinclair from England to Australia, memories of their intense love affair fresh in his mind. When they arrive he quickly learns he isn't the only man in this new country who's infatuated with the breathtaking, blonde-haired beauty.

Women are turning up dead, victims to the worst kinds of depraved acts—women who fit Caitlyn's description—and every clue to the murderer leads back to Darien's family. Frantic to save Caitlyn's life, he sends her up north to her family, hoping to free her from the murderer's grasp. But she never makes it there. When he receives word that her dead body has been found, his heart breaks and he throws himself into a life of debauchery and sin as punishment for failing to save the woman he loves.

When yet another murder occurs, Darien believes he will be accused of the crime, so he flees. He finds himself in Jarvisfield—the same town where Caitlyn's family lives. But he soon learns that the murderer who has been butchering blonde-haired, green-eyed women has followed him there.

He's in for even more of a shock when he discovers that his beloved Caitlyn is not dead, and has in fact, been living in Jarvisfield for months. This time he will protect her. However, Caitlyn is having none of it. She believes Darien has betrayed her, and she won't fall for him again. No longer is she his lustful lover, but rather a lady of chastity, determined to live an independent life—one without Darien.

She encompasses much of her own families history into her books, as well as setting most of them in her home town in North Queensland, Australia.

She is happily married to her childhood sweetheart and soulmate and living in North Queensland.

I always wanted to write a book about the 7 deadly sins, but I didn't want to do something that had been done to death. Then one day I thought that for every sin there would have to be a virtue. I thought how cool it would be to do a series of books each titled after the sin and matching virtue.

This series wasn't an easy task though. It has been sitting on the back burner for almost 10 years. Finally it was due to my husbands persuasion that I finally sent the first two books to the publisher.

Caitlyn just stared at Darien. She knew he must be confused at seeing her escaping the brothel under the disguise of night and dressed as a man. No explanation would satisfy him. She certainly couldn't tell him she had gone to see the women who worked for him and gave them their weekly supply of cannabis. Even if she did, she doubted he would understand.

But she had to tell him something.

"I came to see you," she blurted out. Remembering the horrific news she'd heard earlier in the Jordan's Rose, she thought to use that as her escape. "The police found one of the women who work here behind the brewery warehouse. They say she was cut up pretty bad."

Lifting his hand to her face, his roughened palm cupped her cheek. "I'm sure there's nothing to fear."

"She's the second woman found in such a state in the last couple of months though."

She nodded. "I heard some of the brothel women saying the murders look like those that were happening back in London before we left."

She watched his expression change from mild concern to something that looked almost like fear.

"What is it?" she asked. "Do you know what might be causing this horror?"

He shook his head. "I think it would be safer for you to travel north to your father until the police find who's responsible."

She gripped the front of his coat. "Please don't send me away," she begged.

She wasn't ready to leave Rockhampton, not yet at least. She'd only just gained the trust of the women who worked there enough that she was starting to make a real difference. It was more than that though. Darien sent Martha north shortly after all of them had arrived in Australia and it took barely a week for him to resume his affair with her. If she were to leave, what would stop him from doing the same with another woman? He owned a brothel after all, a temptation few men could ignore.

She needed to convince him things were safe enough for her to stay.

"I'm sure it's all just an overreaction," she said, hoping to sound convincing. "I'm sure you were right when you said there's nothing to fear."

He studied her. "Do you honestly believe that?"

His fingers caressed her cheek. "Wouldn't you feel safer with your father and sister though?"

She shook her head. "You make me feel safe, Darien."

Lifting his hand to the hat she'd worn to hide her blonde hair, he removed it, throwing it to the ground near their feet. He ran his fingers through the now loose strands of her hair, bringing some of it up to his nose and smelling it.

"I can't bear the thought of you being in danger," he said, his tone softer than she'd ever heard it before.

Reaching out to him, her hand rested on the firmness of his chest. "Please don't send me away," she pleaded. "I want to stay with you."

"Why?" he asked, rubbing her hair against his cheek. "You could have any man in this town. Why do you want to stay with me?"

Leaning into him, she placed a light kiss on his lips. "I don't want any other man, Darien. You're all I want."