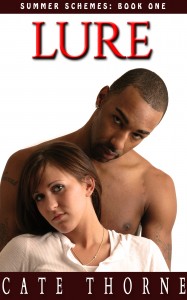 “He was every wet dream she’d ever had about hot black teachers.”

Wyatt Taylor is a disgraced, community-college history teacher, dismissed that spring after news reports broke the story of his scandalous affair with a student. Seeking refuge from public humiliation, he settles into a waterfront cottage, loaned to him by his wealthy best friend, in a quiet northern California coastal fishing town to rebuild his life.

But when Nicole Hammond, the hypersexual vixen daughter of the town mayor down the street gets a look at her new neighbor’s muscled, shirtless torso as he moves his stuff into his new digs, she is determined to land this studly catch before leaving for college.

Will Wyatt be able to withstand the girl’s determination to force his submission to her basest desires? Or will his resolve to restore his ruined reputation prove no match for the scheming schoolgirl? Find out in this short and fun bedtime story of interracial temptation and release.

Cate Thorne writes in the foothills of Northern California. She lives in a big old log house surrounded by mountains and ancient oaks and huge pines with her lively Jack Russell terrier clowns. She adores watching the antics of the visiting deer herd, wild turkeys, squirrels, raccoons, and the occasional peacock. When not writing or reading erotica and romance, she tends her bees, orchids, and gardens — and plays with her hunk of a man.

Of course, I have no such personal experience of such a man…uh hunh, she snickers.

So far no students had signed up for his online courses, and his profile had been up for two weeks. He supposed he had to be patient, but he had to admit that without work to distract him, he dwelt on his former community college years far more than was probably healthy. He was about to shower away the sweat from his morning stroll when the doorbell rang.
Wyatt arched a brow, glancing at the front entryway.
He’d barely finished moving in the day before, and Josh had left for his parents’ house in Seattle as soon as they’d unpacked the last box. Who could possibly be looking for him so early in the morning?
Standing, Wyatt chugged the last of his beer before crossing the room to head for the doorway. He was prepared to meet a religious panderer, the mail carrier, a local politician, anything but the sight that actually greeted him when he opened the door.
She was amazingly petite; probably no more than a good five-foot-two, with long, dark hair that fell straight down her back in a damp ponytail. An angelic face was highlighted by pale green eyes and pixie-like nose. Full, heart-shaped lips were curved into a welcoming smile.
Though her face might be angelic, her attire was anything but. The T-shirt she wore was so thin he could see through it to the lacy bra beneath that cupped small, pert breasts. The shorts that accompanied said shirt were so brief they’d be more appropriate as nightwear over anything that should properly see the light of day. The amazingly tiny garment did, however, accentuate proportionally long, creamy legs that extended down to scarlet painted toes.
“Hi!”
Far too late, Wyatt realized he’d been staring, and the young woman was holding out to him a ceramic dish topped with aluminum foil. “I’m Nicole Hammond. I live in the Victorian down the street. I couldn’t help but notice you moving in this past weekend, and thought I’d make you some brownies to welcome you to the neighborhood.”
Wyatt had to force his dry throat to produce words. “Oh… Hey.” The way he took the dish from her was automatic, almost as if he were watching himself do it from beyond his body. “Thanks.”