You are here: Products Luna Tick by Angie Merriam 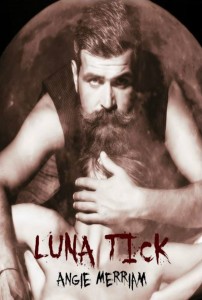 When Nick left Lincoln bound for a new life in a new town, he knew his purpose, carry on his mentor’s traditions. With a new identity, new job, and a new family, Nick begins to feed his darkness, but will his past threaten his demented future?

Luna Tick is the continuation of You Are My Sunshine, a book a wrote while watching Dexter. I loved the concept of a story from the killer’s POV so I wrote it, however my killer (s) are not Dexter, they are evil to the core. Luna Tick has more of a dark sexy side that wasn’t there with Sunshine.

I was on my second cruise around the block when I saw her on the corner–alone. Perfect. I almost felt bad, seeing her standing alone, fidgeting with her hair. Her face lacked the innocence that usually graced the faces of girls her age. She was jonesing for a fix. She didn’t even flinch when I pulled my cruiser up to her, my window down.
“You know prostitution is illegal right?” I gave her a stern look that was contradicted with a small grin. Confusion was a key point in getting them to trust me. Seems as if it should be the other way around but these women weren’t typical women. They thrived on the dark side of life. They were used to being blatantly lied to. They could sniff out a rat just by the look on his face. I had to approach them assumingly, yet charming enough to get their attention. Offer them something different than their dealer or pimp, and they had to trust me–a cop. I have become a master manipulator.
“Fuck you, pig. I’m not a prostitute, just waiting for a friend . That’s not illegal.” She snapped her gum while twirling her hair around her finger. Her body language clearly in need of a fuck or a fix.