You are here: Products Lucifer’s Lunatic by Destiny Blaine and Marc Alice 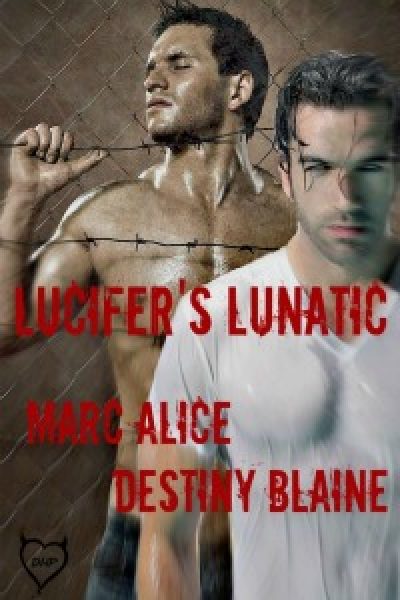 Only one man can keep him sane and his sole purpose is to drive him crazy.

With a name like Manson, it was no great surprise when Manson Angola ended up in the pen. Some believed he’d been doomed for such a fate since birth. Others thought he was guilty as charged and still others believed he just downright deserved what he had coming to him.

What he had coming was shackles and chains, solitary confinement, and numerous attempts to make his life a living hell. Until one day, in walked a man who could’ve been the devil’s child, but in fact, had a more befitting name—Lucifer.

Dolled up in deception and as pretty as any man had a right to be, Lucifer—or Luke for short—stood about six-foot-two and weighed around two hundred and twenty-two pounds to be exact and he was as real to Manson as the guards who made a habit out of throwing him to the real wolves—the fellows who seemed to have a thing for a young fellow serving back-to-back life sentences for murders he didn’t commit.

Most men should’ve been afraid of someone like Manson. Then again, most men in the maximum security prison knew why he’d been sentenced.

He belonged to Lucifer. And the other prisoners were just doing their jobs by breaking him in.

Marc Alice set out on a writing journey ages ago and discovered creative freedom at Dark Hollows Press. Working on collaboration projects, Lucifer’s Lunatic and Sins of Wolves: The Safe Mountain series, Marc believes love exists at the root of goodness and evil. He enjoys writing stories where there are clear antagonists and protagonists, and finds it’s always enjoyable when the two work out their differences and reach satisfying, and sometimes intimate, conclusions.