You are here: Products Loveland by Andrea Downing 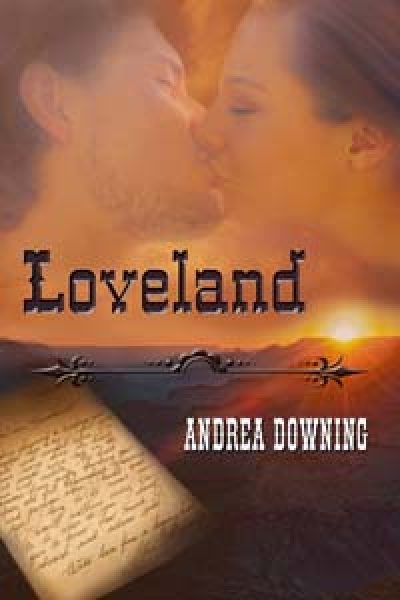 When Lady Alexandra Calthorpe arrives at the Colorado ranch managed by her uncle, she has little idea of how the experience will alter the future her father has in mind for her. Headstrong and willful, Alex learns to lasso more than the corral fence post as she tries to emulate the lives of the cowpunchers around her and cross the divide from the strictures of Victorian English society to the freedom of the American west. Having overcome a disastrous marriage in England, and with a burgeoning art career in New York, she tries to reconcile her desire for independence with her love for top hand Jesse Makepeace. But when the brutal winter of 1886 blows in killing most of the ranch herd, Alex sees the life she had hoped for on the open range changed forever.

Andrea Downing likes to say that when she decided to do a Masters Degree, she made the mistake of turning left out of New York instead of right to the west, and ended up in the UK. She eventually married there, raising a beautiful daughter and staying for longer than she cares to admit. Teaching, editing a poetry magazine, writing travel articles, and a short stint in Nigeria filled those years until in 2008 she returned to NYC. She now divides her time between the city and the shore and often trades the canyons of New York for the wide open spaces of Wyoming. Loveland, her first book, was a finalist for Best American Historical at the 2013 RONE Awards. Lawless Love, a short story, part of The Wild Rose Press ‘Lawmen and Outlaws’ series, was a finalist for Best Historical Novella at the RONE Awards. Dearest Darling, a novella, is part of The Wild Rose Press Love Letters series, and comes out Oct. 8th and Dances of the Heart,, another full length novel, comes out in the next few months.

I’ve spent most of my life in England but, in 2008, returned to the city of my birth, New York. I always had a deep interest in the American west and family vacations were often spent on ranches; to date, my daughter and I have visited about 20 or so throughout the west. When I returned to America I was reading a biography of the Jerome sisters; Jenny Jerome was Winston Churchill’s mother, but her sister Clara was married to Moreton Frewen, who owned one of the first ranches on the Powder River in Wyoming. One thing led to another and my research began into the British in the west. It turned out there were numerous cattle ranches in the mid to late 1800s owned by British companies, more able to get funds than Americans in the post Civil War years. Most of the Brits who came out were lesser aristocrats, on allowances, or remittances, from their fathers or older brothers who had inherited titles. This gave rise to the name, ‘remittance man’—and gave me the idea for my book, Loveland.

The light was failing and the birds were settling with their evening calls. Somewhere in the pasture a horse nickered. She sensed Jesse was there, watching, but she never turned as he stood at the fence. She heard him climb over and ease up behind her. He took the coiled rope from her in his left hand and slid his right hand over hers on the swing end, almost forcing her backward into his arms.
She thought of paintings and statues she had seen, imagining his naked arms now, how the muscles would form them into long oblique curves, how he probably had soft downy fair hair on his forearms, how his muscle would slightly bulge as he bent his arm. His voice was soft in her ear, and she could feel his breath on her neck like a whispered secret.
“Gentle-like, right to left, right to left to widen the noose, keep your eye on the post—are you watchin’ where we’re goin’?”
He made the throw and pulled in the rope to tighten the noose. Alex stood there, his hand still entwined with hers and, for a moment, she wished they could stand like that forever. Then she took her hand away and faced him. For a second he rested his chin on the top of her head, then straightened again and went to get the noose off the post while coiling in the rope. She looked up at him in the fading light and saw nothing but kindness in his face, simplicity and gentleness that was most inviting. A smile spread across her face as he handed her the coiled rope and sauntered away, turning once to look back at her before he opened the gate. Emptiness filled her like a poisoned vapor seeking every corner of her being, and she stood with the rope in her hand listening to the ring of his spurs as his footsteps retreated.

Be the first to review “Loveland by Andrea Downing” Cancel reply