You are here: Products Love You Forever by Amelia Bishop 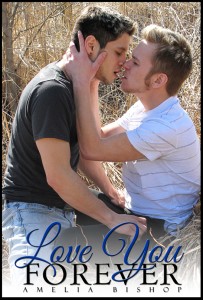 Love You Forever by Amelia Bishop

They grew up together, and fell in love along the way. But the night Cole & Rick came out to their parents their lives changed in ways they never expected. Before their romance could stand on its own, they were cursed by the gods to remain together, or die.

What happens when kissing your boyfriend becomes a life or death situation? When you have to stay together no matter how your feelings change?

Cole promised he’d love Rick forever. He had no idea how difficult that would prove to be.

Cole strained to hear any signs of Rick’s approach, but the forest remained silent. He checked his phone again. Nine thirty and no missed calls or texts. Fuck. Ten more minutes and he’d call or head over to Rick’s house. What if it had gone badly? Would he even be welcome there? Once Rick came out, his parents would surely realize that Cole was more than just their son’s ‘best friend.’ Their frequent sleepovers would be exposed for what they really were. Will they hate me now?
The crunching of footsteps, still far off down the path, filled Cole with relief. But when Rick walked onto the sandy river’s edge and into the moonlight, Cole could see it hadn’t gone well. Rick’s long bangs, usually carefully disheveled, were artlessly slicked to the side. His eyes were smeared with black where his eyeliner had run, a sure sign he’d been crying. Ironic, that the ‘emo’ look would deteriorate so easily under the strain of actual emotion.
His camera was slung over his shoulder, not unusual, but under the circumstances it didn’t bode well. That camera was Rick’s most precious possession. If he’d felt the need to take it, he might not be planning to return home.
“Tell me what happened.” He didn’t acknowledge the damp sleeves of Rick’s sweatshirt, his trembling lip, or his puffy nose. Cole ached to hold him, but Rick held himself back, still close to tears, and turned away, facing the river.
“I can’t go back.”
“Shit! They kicked you out?”
“No. I just can’t go back tonight. I don’t want to. I can’t see them, Cole, I…” He slumped onto the boulder, face in his hands, and cried silently. Cole stuffed his hands into his pockets and paced the bank behind him.
Rick wasn’t a good crier. Cole had only seen him cry twice in all the years they’d been friends, and each time Rick had retreated afterward, angry and embarrassed. As much as he wanted to wrap Rick in his arms, he feared the reaction he’d receive. But when Rick sniffled, thick and wet, Cole muttered “Fuck this,” and sat beside him, pulling him close.
When Rick stopped crying, Cole asked him again. “What happened?”
“My mom didn’t believe me. My dad was pissed. He said I was just trying to get attention. It took a while to convince them I was serious. They tried to tell me I was wrong, that I didn’t know what I wanted yet, I’m too young, all that shit. I said I did know, I had to keep insisting. Finally they got it. And they were just…disgusted. I could see it in their faces. They think I’m gross.”
His voice broke on the last word, and he pressed his mouth against Cole’s shoulder, stifling a sob. Cole held him tight, but kept carefully silent. Finally, Rick turned his head, laying his cheek on Cole’s chest, and continued, “My mom said she still loves me, but it sounded like a lie. My dad’s disappointed in me.”
“He said that?”
“Yeah.”
“Oh, Ricky.” The pet names were a secret indulgence, one their adolescent insecurities didn’t allow them to acknowledge openly. But Rick only sighed and relaxed against Cole, his tears drying and his breaths even.
“How did it go at your house?”
Cole cringed. Had he really been wishing for more drama? “It was fine, my parents were cool. They barely said anything, like it didn’t even matter.”
Rick let out a deep breath and sat up. “That’s good. You must have expected it, though.”
“Yeah. I guess.” He tried not to feel guilty about how easy his coming-out had been. “What had you been expecting?”
“I guess I thought they wouldn’t care. Or that they already suspected, or something. I didn’t think they’d have such a problem.”
“They say anything about me? Did you tell them about us, I mean?”
“Yeah. You’re not allowed to sleep over anymore.” Rick laughed without any amusement and finger-combed his hair back into its usual style. “Big surprise. How about your parents?”
“They said you can’t stay in my bedroom. That was the only thing they were mad about, actually. That I lied about you and that I might be having ‘unsafe sex’. I told them I wasn’t, but they didn’t want to hear details.”
“Will they let me stay over tonight?” Rick’s voice cracked a little, but he kept his face composed.
“Of course. They love you, you know that. They’re just mad we were fucking around under their noses.”
Cole reached out and laid his hand against Rick’s cheek, another too-sweet gesture that was unusual out of the bedroom for them. But they were “out” now, weren’t they? No need to be so careful. And here, in their spot, they were almost as alone as when they were locked safely in a bedroom. Rick leaned into his palm and closed his eyes.
“Sorry. I’m being such a baby. I fucking hate crying.”
“I know. You don’t have to feel like that with me, though. I love you.”
“I love you, too.” Rick met his eyes then. They’d never said ‘I love you’ so openly before. Usually it was whispered, moaned, eyes closed and bodies naked. Rick smiled, and Cole said, “We’re out, now. We can say that whenever we want.”
“Yeah.” He leaned in for a kiss, lips salty, cheeks damp, and Cole met it eagerly. Rick was the only guy Cole had ever kissed, and at eighteen, he didn’t care to try anyone else. They’d gone from grade school best friends, to junior-high masturbation partners, to high-school secret lovers. For Cole, Rick was sex and love and pleasure and friendship, all rolled into one.