You are here: Products Love Underground by Vanessa 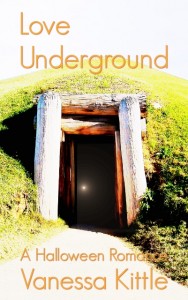 Elaine is a college sophomore who is dragged off by her friends to a Native American burial mound on Halloween. They perform an ancient ritual to speak with the dead, but Elaine ends up meeting someone or something who is still very much alive.

Love Underground is a hot, sweet, and spooky paranormal romance that is perfect for the Halloween season.

A love for scifi the paranormal and romance.

Be the first to review “Love Underground by Vanessa” Cancel reply