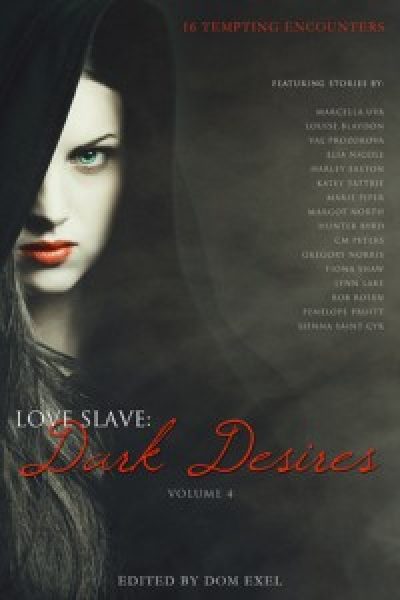 here are sixteen Hot-As-Hell stories about fairies, vampires, demons, shape-shifters, and everything in between. Slip into the supernatural world with tales of gothic dalliances and haunting love affairs. From sinister vampires with an eternal lust for each other to an otherworldly entity searching for his soul mate, this anthology is packed with creatures intent on satisfying every desire.

*A photographer visiting an abandoned church hopes to get some great shots, and winds up getting much more than she expected thanks to a haunting stranger.

*A man seeking to debunk rumors of a succubus finds himself in the arms of the very creature he doesn’t believe in. Will the night bring his demise or the fulfillment of all his desires?

*A new homeowner finds herself sharing the residence with a ghost who wants one thing…to have the big O with her still living ex-husband.

* A struggling writer takes a trip to Japan and finds inspiration in a enigmatic beauty straight from the pages of folklore.

* A lonely girl from a secluded island is about to be married to a local merchant against her wishes. When a handsome man offers her an escape, can she forget the tales of sirens and sea monsters long enough to let him take her away?

*An artist at a comic convention looks forward to meeting the cosplayer he’s watched all weekend, only to find out costume isn’t a costume at all.

This selection of tales, some devious, some whimsical, but all bewitching, offers glimpses into dark obsessions, occult incidents, and unearthly realms. So come with us away from the every day, and find yourself enchanted by a new favorite author.

Dom Exel is the editor of the Love Slave ebook series and the mastermind behind the website LoveSlave.org.

From the story Moonbeam by Sienna Saint-Cyr
“What do you want with me?” My question was more accusatory than curious.
“Just your company.” He smiled. “You’re not like the others.”
“The other what?”
“Humans.”
I took a deep breath and stopped walking. Ray jumped when I spun around to face him,
but then relaxed his shoulders. His pale face made my insides stir, making me equally as angry as I was turned on.
“And just what the hell is that supposed to mean?” I narrowed my eyes.
“You’re feisty,” he announced, somewhat nonchalant. “I like that. You’re pretty too.
Nice arms, tone thighs, petite face, and you don’t need to wear makeup, honestly. You’re perfect without it.”
“Heh…” I didn’t even know what to say to him. Flattery, no matter how much I hated it,
seemed to be proving more successful when it came to him. If that wasn’t irritating enough, he still hadn’t answered my question. I crossed my arms, refusing to move until he told me more.
Ray shimmied to the side of the trail, shaking his head. “Are you not afraid of me?”
“I am,” I admitted, “but I’m not stupid. You’re using some kind of weird emotion control
on me, and it’s making me less afraid. Even though it should be making me more afraid. I just want to know what you want from me. Why did you promise the mayor you’d tell him anything he wanted to know when your true intent is to flee?”
His grin grew to the width of his face. The emerald eyes I’d already come to hate, also
made my breath catch. Ray reached for my hand, and suddenly, I found myself incapable of moving.
“I’m not what you think I am, Mina.” He lifted my hand to his face, and kissed the back
of it.
Shivers ran down my spine, rushing straight between my legs again. I could hardly
breathe. My eyes began to shut at his touch, as if he had the ability to control my every move. Just as I was about to fall into him, collapsing under his embrace, he withdrew, and I was able to regain my composure.
I felt my lashes fluttering like a silly schoolgirl. I was thirty. No man should ever have
that kind of control over a woman. This one seemed to, though.I pulled the blonde wisps of hair from my face and stared at him.
“What are you, then?”