You are here: Products Love Repaired by Deana Birch 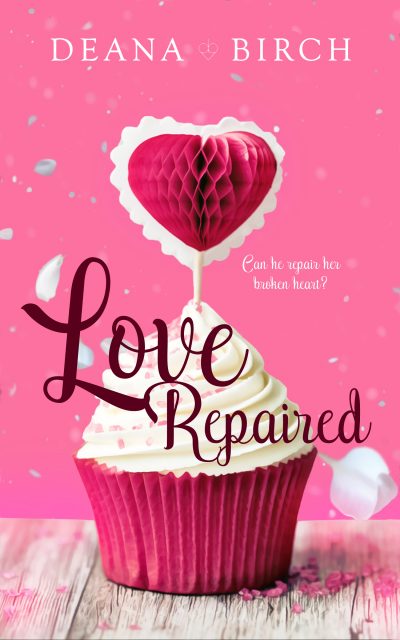 Attorney Amee sets aside her own needs to juggle the broken pieces of her life and family until mechanic Ben repairs her heart.

Divorce attorney Amee Benton—who has an ex of her own—is pretty sure she’s a #MomFail. Showing up late on a Friday night to retrieve her car from the shop and finding the pink frosted cupcakes she forgot to leave at her daughter’s ballet camp confirms it.

When mechanic Ben Mathis confesses to stealing one of the confections and asks who is taking care of Amee, she knows he’s a unicorn—a magical, beautiful beast who surely only exists in fantasies, so she tells him just that, with an F-bomb for good measure.

Amee has three things Ben finds irresistible in a woman—brains, a family and a serious potty mouth. During a chance run-in at Ben’s own personal hell, AKA the mall, he summons the courage to ask her out. Though Amee is leery of dating a younger man and Ben is more than aware of their social gap, the two take a chance.

But Amee’s life isn’t like his. And when her ex returns and the doubting divorcée blunders, all Ben’s insecurities are piqued anew. Now, Amee must prove to Ben that his worth is much more than stand-in dad and rebound boyfriend or she’ll watch her magical unicorn gallop off into the forest forever.

Contemporary romance and erotica writer Deana Birch was named after her father’s first love, who just so happened not to be her mother. Born and raised in the Midwest, she made stops in Los Angeles and New York before settling in Europe where she lives with her own blue-eyed Happily Ever After. Her days are spent teaching yoga, playing tennis, ruining her children’s French homework, cleaning up dog vomit, writing her next book, or reading someone else’s.

The idea for this book actually came from the idea of calling a girl, "Cupcake" as a pet name, so it's very fitting that the cover reflects that!

Duggan’s was a not-too-hip, not-too-chic coffee shop downtown. It had its own parking lot and outdoor seating with canvas umbrellas for overly sunny days.

Ben—I didn’t know his last name—was sitting at a table for two toward the edge of the terrace. His long-sleeved army green Henley was pushed up to the elbows and his casual sprawled posture opposed the nerves brewing in my belly. He stood when he saw me, those damn dimples pressing into his cheeks with his smile.

Time to face the unicorn.

He side-stepped around the table and pulled out the wicker chair for me. The earthy scent from Friday night returned, this time without the motor oil.

The grittiness of his voice made me swallow hard, and I sat in the chair. He reached up to adjust the angle of the umbrella to protect us from the sun. What promised to be the perfectly formed V of his lower abdomen peeked out from between a black elastic waistband under his jeans and the green shirt.

Unicorn cupcake eating man candy. Shit. I was in over my head. He was way out of my league. My workouts consisted of me taking the stairs and vacuuming with headphones on. I hadn’t even been on a date since Pete and I had divorced. I shouldn’t have been allowed to play ball.

New plan—Excuse my behavior from Friday night, tell him I was not ready for any kind of relationship, go home and take a long, long shower thinking about his stomach.

“I assumed you would be.” He scooted in, and before he could say anything else, the waiter came over. I ordered a fluffy complicated sugary mess of caffeine and Ben asked for just a water.

“Hear what?” There was no way in hell I would tell him why I’d called him a unicorn. A fucking unicorn.

“Your list.” His blue gaze challenged me from the opposite side of the table, then he blinked.

“Yes, you do. You have a list of why you’re not going to give me your phone number and agree to see me again.”

I sank a little into my chair before puffing out my chest, mulling over my next move.

“Maybe you should tell me your list.” Every muscle on my cheeks wanted to smile but years of questioning witnesses had polished my game face. I shaped parallel lines with my forearms on the black wire tabletop.

“Which one do you want me to tell you about?” he asked with a casual grin.

Stupid dimples. His dimples were dumb. Dumb like puppies.

“How many are there?” I raised my eyebrows.

“Many. Many. So many lists…” Leaning in, he licked his lips. He lightly traced a semi-circle on the top of my hand. “Grocery lists, home repairs, back to school…”

The breath from the base of my lungs rose up my chest and escaped slowly through the ‘O’ I’d formed with my mouth. I hadn’t been touched like that in ages and mundane tasks had never sounded better. Christ. I was practically panting.

His recoil startled me and he cleared his throat. The waiter set down our drinks, breaking the beautiful tension.

Creamy froth parted as I blew into the mug before taking a cautious sip. Without the haze of his touch, I regrouped. I placed my coffee on the table and he drank from his water bottle.

“Why what?” He screwed the cap on and set the bottle on the table.

I’d studied body language. I knew liars and I knew nervousness. His open legs and arms were neither. He was confident, honest. Real.

A small airy chuckle accompanied a shake of his head and his blond hair brushed against his shoulders.

“Why not you, Amee Benton?”

Questioning soon-to-be-ex-spouses was much more satisfying. They weren’t allowed to answer questions with questions.

“What’s your last name?” I squinted.

I sipped my coffee.

He propped his elbows on his knees and searched my eyes. “And you’re kinda beautiful. Beauty and a dirty mouth are a weakness of mine.”

“Like cupcakes?” I fought the smile, but when his dimples appeared, I lost the battle.

“Just like cupcakes.” He shifted in his seat and pulled his phone from his back pocket. Quick tapping from his thumbs hit the screen before he slid it to me.

“May I please have your phone number?”

Yes. He could. Shit.

I picked up the phone. Under the heading New Contact, there was one word. Cupcake. I giggled, like a school girl in a candy shop. Pitiful. I typed in my number, hit new message and sent myself a text.

Satisfied, I grinned and handed the phone back to him. Instead of reviewing my handiwork, he set it face-down on the table.

“You’re not going to check? Make sure it’s the real number?”

My toes twitched in my flats. The remainder of my coffee and foam clung to the edges of my cup and trailed down to the empty bottom.

“Are you free Friday night?” Ben asked with a rasp.

Coffee had been one thing. Safe. The sun was shining. Friday night would be a date. Risky. Dark.

“What did you have in mind?” I asked. The man had other lists. Lists hidden in his dimples and heavenly touch.

“A movie. Popcorn.” He lifted a shoulder.

One small step for Ben Mathis and a giant leap for Amee Benton. Crap. A firetruck and its sirens raced by on Third Avenue and the intrusive sound gave me a minute to think. This is what I’d wanted when I’d divorced Pete, right? A chance for something deeper before I shriveled up and had as many cats as Shae had dolls.

But then Pete had gotten drunk and killed another human being. He’d pleaded guilty to a lesser charge and had been taken away to a correctional facility within months, locking away my bright future behind bars with him. Instead of free weekends to build a new life, I had one hundred percent parenting duties twenty-four-seven, not to mention my career.

“Can I meet you there? I’m not sure the girls are ready for their mom to be on a date.”

“I’ll text you.” He flipped over the check and dug into his front pocket.

With the money and check secured under my used coffee cup, Ben walked me to my car. When we arrived at the driver’s side door, I turned around to face him. He pushed his arm into the window and crowded my space.

“I gotta admit that I’m a little disappointed.” He was close. So close. And the hair on the back of my neck stiffened with the scratch in his voice.

I summoned any courage I had and asked, “Why’s that?”

Soft stubble caressed my cheek as he leaned into my ear. His warm breath brushed my neck as he whispered with his ridiculous rasp, “I was looking forward to your dirty mouth.”

My expression must have been his desired response, because when he stepped back and freed the heat between us, his grin stretched from ear to ear.

He swaggered away and climbed into a beat-up truck.

Revised plan—Shower and a lonely orgasm.