You are here: Products Love or Duty; The Throne Awaits by Rachael S. Damar 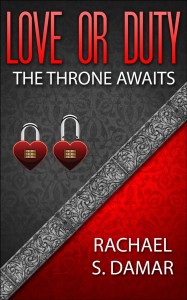 Love or Duty; The Throne Awaits by Rachael S. Damar

When Prince Ivan’s older brother Petar gives up his rightful inheritance as the next King of Assyria to be with the one he loves, Ivan is left in a compromising position. He has served in the temple all his life to undertake priesthood and is now thrust into the role of ‘future King’ without the training, knowledge or experience to undertake such a task.

Ivan is sent away to live among his people, in a village where no person will recognize him. His mother the Queen gives him one ultimatum. He is not to fall in love with a commoner. He is however, to learn the ways of the common man so he can become a King for the people.

Ivan undertakes this task to fulfill his duty as King of Assyria. However, in his new found home far away from the palace he meets a young lady by the name of Katarina. It is not long before he finds himself in the same dilemma as his older Brother.

Love or Duty is a historical romance novel series.

Rachael S. Damar was born in 1981 and is the mother of two daughters, aged seven and five. Her husband who proposed to her on the day they both graduated is now the head of operations in a major retail store in the UK and continues to support her in her achievements as an author.

What happened over the next few years was a remarkable love for writing stories that touches people emotionally. I can only speak for myself in the present and what motivates me now is the art of being able to write and effect peoples lives, even if that is only to entertain them. I hope though that I also lift their spirits and they really enjoy the books.

King Igor looked down on the bowed head of his second son, his heart heavy. The task before him was a most unpleasant one, but it had to be done. The real problem was how he should approach the topic at hand.
Prince Ivan was the second crowned prince of Assyria. He stood at a relatively short six foot, King Igor and Prince Ivan’s older brother, Prince Petar both standing at six foot four. Where both King Igor and Prince Petar had blond hair that fell only to the nape of their neck, Prince Ivan’s was dark, dark as a starless night in winter and kept in a braid, well past his shoulders.
King Igor frowned as he noticed the length of his hair. He would have to cut it when he joined the order at the temple on his eighteenth birthday in a year. No, King Igor mused, that was no longer the case for his second son. This caused King Igor to let out a sigh. He was about to turn Prince Ivan’s world on its head and it was not going to be a pleasant experience for either of them.
“Did you need something father?” Ivan’s baritone voice spoke, softly, carrying the clear tone all the way to the doors of the hushed throne room. Prince Ivan had been kneeling for the better part of five minutes and the fencing master, Bruno, would be most displeased if he was late for his daily fencing lesson and Master Bruno was not one that he wanted upset with him. Prince Ivan prayed for his father to get to the point soon. It was not that he rambled on, he just always seemed to take his time whenever he spoke.
“Yes. So I do.” King Igor’s rumbling bass voice responded. Unlike his son’s a moment ago, his voice rolled in waves in the large space, breaking the silence as it echoed through the room. He leaned back on his throne, his lanky frame still struggling to fold into the uncomfortable chair. He was not a large man, some even said he was too thin, but he was tall and most things were not made to accommodate his height, not even his throne.
That was another thing that he and his son did not have in common, he thought. Where he was tall and thin, almost sickly in appearance thanks to the cares that running a kingdom laid upon a person, his second son had been given broad shoulders, muscles in abundance and a trim waist, made from hours of the fencing and riding the young man did when he was not at his studies. He really was a wonderful specimen and it came as no surprise that the women of the kingdom took notice of him when he entered a room. Of course, having been destined for the temple his entire life, Prince Ivan had never taken notice of a woman. It was just as well that he had not or this would have been an impossible decision to make.

Be the first to review “Love or Duty; The Throne Awaits by Rachael S. Damar” Cancel reply