You are here: Products Love on the Back Burner: A Tasty Romantic Comedy by Barbara Oliverio 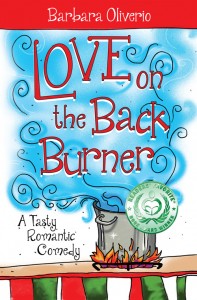 Love on the Back Burner: A Tasty Romantic Comedy by Barbara Oliverio

Readers’ Favorite Award™-Winning Love on the Back Burner spins the story of sassy Alexandria D’Agostino. She is youngest in a tight-knit Italian-American family with a successful marketing career and a passion for cooking, yet her romantic life is less than 4-star. For years, she has tried cooking her way into men’s hearts by flaunting her old world culinary skills, but now, she’s changing the menu. She dishes up childhood favorites to a succession of first dates (recipes included). The book features an engaging cast of characters including a rock-star-turned- priest brother, a no-nonsense Italian immigrant grandmother, and a crew of friends who are always up for a good meal. With a dollop of persistence and a dash of laughter, will Alexandria discover the recipe for happiness — and perhaps love?

Barbara Oliverio is the daughter of Italian immigrants and grew up in North Central West Virginia with a love of reading and a passion for learning. Following a career path that included being a teacher, journalist, and marketer, she has lived as far away from home as Italy where she practiced her family’s native tongue as well as took advantage of living near to other European countries to travel extensively. A rabid Pittsburgh Steeler fan, she lives with her husband, an equally committed New York Giants fan, in suburban Denver where off-football-season dinner conversation is calmer and is usually accompanied by a meal she cooks from one of her mother’s treasured recipes. Other interests include New York Times crossword puzzles, good movies, and travel. She volunteers extensively for her parish and writes for its publications. She also teaches part-time for the St. Catherine of Siena Institute.

My friend Nancy suggested that I collect my mother’s great recipes into a cookbook. Since I didn’t have enough for an entire cookbook, I came up with this fun story to share these (and other) recipes with people by writing a story about a young woman who sees if the way to a man’s heart is really through his stomach — by cooking the recipes of his boyhood.

Be the first to review “Love on the Back Burner: A Tasty Romantic Comedy by Barbara Oliverio” Cancel reply