You are here: Products Love Notes by Marcia James 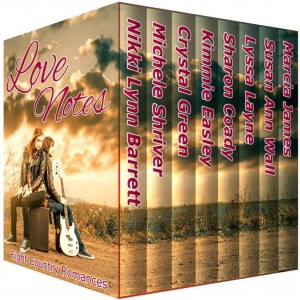 Country music tells a story. The songs come from the heart and soul…musical tales of good times, bad times, and everything in-between. Whether it’s in a hole-in-the-wall honky-tonk or under the bright lights of Nashville, these musicians have something to say. From star performers in packed arenas to first-timers ready to make their dreams come true, they’ll serenade you with a love song. Welcome to Love Notes: EIGHT never-before-published romantic stories with a country music twist.

I’m pro-pet-adoption, and I loved the opportunity to set my romance in a small town’s animal shelter and reinforce the important message of “Adopt. Don’t Shop.”

When the puppy was sleeping soundly, Shauna stood to go. “Why don’t you stay here and hold him, so he’ll know he’s not alone. The best thing for this little boy is food and sleep. And while you’re sitting here, think of a name for him.” Shauna left, heading down the hall toward the dog runs.
Ryan looked at the puppy. Somehow the usual dog names—Spot, Rover, and the like—didn’t seem right. So he gently rocked the puppy while he considered other names. He began to hum, something he often did when working out a problem. Then he started softly singing the song Elvis had made famous, “Hound Dog.”
The puppy had been twitching, as though having a bad dream, but he settled down when he heard the song. Obviously, he had good taste in music. Ryan smiled. He could name the puppy Elvis, but it didn’t seem to fit.
Ryan segued into Buddy Holly’s “Everyday,” a personal favorite. The little guy’s mouth opened in a doggie grin. Maybe he should name him after the singer?
He stopped singing and said, “Buddy.”
The puppy’s ears twitched. Each time he said the name, he got the same reaction. So it was settled. Ryan christened him Buddy the Basset Hound.
Cindi stood in the clinic doorway, watching Ryan sing softly to the poor little thing. It was so poignant that her heart swelled and tears pricked her eyes. The tough kid from high school had grown into an admirable man who could gently rock a puppy and—according to what Shauna had told her—befriend and feed a troubled teenager.
God help her, she might be falling in love with Ryan.
She doubted he would appreciate her getting misty-eyed over him, so she simply listened until she got her emotions under control. He was singing the Buddy Holly song, “Words of Love.” Cindi was a sucker for 1950s’ pop music, so she joined in.
Startled by her voice, Ryan stopped and blushed, actually blushed. “Uh, the puppy settles down when I sing to him.”
“He must be a fan of oldies, like me.” She sat next to Ryan and gazed at the puppy. “He looks better already. Did he eat yet?”
“I bottle-fed him with Nancy and Shauna’s help. And I named him Buddy.”
Buddy. It was perfect for the little pup. Suddenly, she remembered why she was there and stood again. “Speaking of eating, I came to get you. Your massive order from the Asian fusion place on Main has arrived. If you want any before the hordes scarf it down, you better come with me.”
Holding the puppy in a towel, Ryan got up from the chair without disturbing the Basset Hound’s sleep. “I need to take Buddy with me. Shauna says he can hear my heart.”
A warmth spread through her chest, and Cindi turned to the doorway before her face revealed what she was feeling. She was a sucker for a man who cared for animals.