You are here: Products Love Next Door by Amelia Bishop 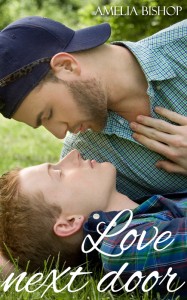 Love Next Door by Amelia Bishop

Leo has taken a break from dating… a long break. He’d rather be alone than have his heart broken again. So, he keeps the crush he has on his sexy neighbor Matt a secret and spends his nights alone. But soon Matt discovers Leo’s feelings and they begin a relationship that quickly grows too intense for both of them. To make it work, they’ll both have to risk heartbreak and learn to trust.