You are here: Products Love is a Battlefield by Vivian Arend & Elle Kennedy 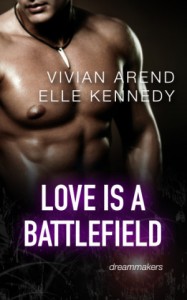 Love is a Battlefield by Vivian Arend & Elle Kennedy

He’s ready to admit she’s all grown up…

After two tours of duty, former Army Ranger Jack Hunter is back in the US, working to keep DreamMakers a brilliant success. Now that his best friend’s little sister is home from college, it’s time to retire his hands-off policy and take action. He wants Pepper Wilson in his bed, but seducing the feisty redhead could be dangerous for more than one reason.

She’s ready to push all his buttons…

Pepper is tired of being bossed around by everyone in her life, especially arrogant, annoying, overbearing Jack Hunter. While she can’t deny the man is out-of-this-world gorgeous, his alpha routine is getting old. His steely determination proves a match for her own, though, and the attraction simmering between them ignites into fiery passion.

But can their wild sexual exploration turn into more without someone getting burned?