You are here: Products Love in the Time of the Dead by Tera Shanley 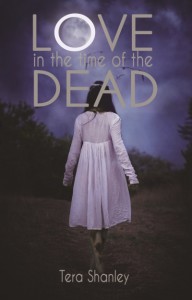 Love in the Time of the Dead by Tera Shanley

Laney Landry has been fighting Deads alongside her brother and friends for three years. But she has a secret. She’s immune to Dead bites and has to find the right people to trust with the information. Her team rallies around her to find a doctor who can extract a vaccine from Laney which could fight the virus that ended the world.

Sean Daniels leads a colony that provides her team with much needed shelter and supplies. He is obviously interested in Laney. The question is whether he’s only intrigued by her as a source for the possible vaccine, or for something more. Tests for the cure might push her body beyond what it can endure, and just as she faces a ghost from her past, her longtime teammate Derek Mitchell hints at an interest in more than just her Dead slaying abilities.

Two honorable and alluring men – one colossal decision to make. Despite historically bad taste in men, can she rise above the chaos of the apocalypse and choose the one who deserves her heart? The right choice could mean the difference between surviving…and living.

Tera Shanley writes in sub-genres that stretch from Paranormal Romance, to Historic Western Romance, to Apocalyptic (zombie) Romance. The common theme? She loves love! A self-proclaimed bookworm, she was raised in small town Texas and could often be found decorating a table at the local library. She currently lives in Dallas with her husband and two young children and when she isn’t busy running around after her family, she’s writing a new story or devouring a good book. Any spare time is dedicated to chocolate licking, rifle slinging, friend hugging, and the great outdoors.

As a romance writer and a zombie fan, I wanted to write a book that combined my two favorite things.

It was late in the afternoon and the shadows from the evergreen forest stretched across her hiking boots. Down in a large crevice, a truck was backed into a ledge and half hidden by Mother Nature. How on earth someone was able to get that vehicle down there in the first place, she couldn’t guess. When the boys removed the brush that had served as camouflage, a mid-sized four-wheel-drive Chevy was exposed, fully jacked up in every sense of the word. Maybe it hadn’t been so hard getting that lifted, red, roaring beast in the hole after all. She smiled sadly. Jarren would have loved it.
Sean tried to start it a few times with no luck. Laney, Finn, and Guist patrolled nervously at the noise. They definitely didn’t need to attract Dead attention with their getaway car stalled in a ditch.
Mitchell popped the hood and the annoying half of him disappeared to tinker inside. The bearable half of him was on display as he balanced on one foot in his gray cargo pants and boots. Damn, that man could wear a pair of pants. He had found a pair that was tighter on his assets and looser in the legs, effectively lengthening his already impressive height and accenting his athleticism.
She jerked her gaze away from Mitchell and mentally strangled herself. What was wrong with her? It was Mitchell. She got over her crush on him in high school. She couldn’t even name a more dangerous man to give her heart to. Her gaze fell on Sean, who was turning the engine over again. Well, maybe she could name one.