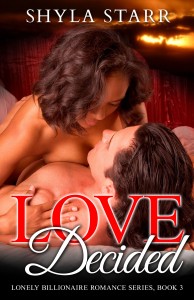 John showed up at Tricia’s doorstep to finish what they had started. Unsure of what to do but still having real feelings for him, she accepts his invitation for dinner.

While at the rodeo with John, Tricia bumps into Rod, the man that she had started to develop feelings for. With two men vying for her affection, Tricia is left with a difficult decision.

Download the book and find out who Tricia decides to be with.

I have always loved reading romance and erotica books but I felt there was a lack of BWWM or interracial romance stories so I wanted to fill that niche and bring this genre to as many readers as I could.

STILL A little unsteady on her feet, Tricia turned the key in her door and waved John off. Entering the darkened house, she dropped her purse in the living room. As she turned, her mind processed the shadows in the room. She realized that someone was there. Reaching for the light switch, she turned it on. Rod was sitting there. He was bleary-eyed from waiting so many hours for her to return home. Tricia stood there silently and stared at him.
Taking her disheveled appearance in, he raised an eyebrow. His voice was cool and showed the effort he was making to remain calm. “Who…was…that…?” he spoke evenly and slowly.
Tricia shrugged. There was no point in lying. What he could not guess on his own, her appearance would show. “I was with John.”
“Did you sleep with him? Who is he?” The strain of the pain he was filling slipped out as his voice broke. He ran his fingers through his hair.
Tricia nodded. “Yes. I did. He is my former boss.”
Standing up, Rod walked over to the window. “You never told me that you guys were,” he paused and spat out the remaining words, “romantically involved.”
Tricia shrugged. “I wasn’t ready to say anything. Last night was not supposed to happen.” She tried to shift her feet so that she could see his expression. Frozen in place, Rod just continued to stare out the window.
“Not supposed to happen? I thought you were with me. Hell, I was thinking about marrying you someday. Without telling me where you were going, who you were with or your history with him, you went off with this guy.”
Tricia did not say anything. There were no excuses and she deserved this.
Returning to the couch, Rod sat down. “Do you love him?”
Uncertain what to say, Tricia did not say anything. Rod looked at her again. Judgment was in his eyes.
“Do you love him?” he asked her again. His voice was sharp and hid the anger that was boiling within him.
Gazing straight into Rod’s eyes, Tricia kept her face emotionless as she lied. “No.”
Rod’s arm jerked outward and hit a vase. The sound of it crashing against the wall startled both of them. For the first time, Tricia started to feel afraid. Rod stood up and strode confidently across the room. Pushing her against the wall, he stopped her from turning away from him. Beneath his arms, she could already feel painful bruises starting to form.
“Don’t lie to me,” he hissed. “Do you love him?”
She nodded slowly. Until this moment, she had not been completely sure of her feelings. She did love John. At the same time, she was starting to love Rod. Until this outburst, he had proven himself to be the man she was searching for.
Moments passed as Rod gazed at her in rage. He did not throw anything or make any movements. Instead, it seemed like he was using all of his willpower to control himself. As the threat of violence passed, Tricia squirmed and tried to get away. Inexplicably, the writhing of her body caught his attention. Sudden desire flushed through his body as he remembered their first time in the Dallas hotel.