You are here: Products Love & Chocolate by Gail Cleare 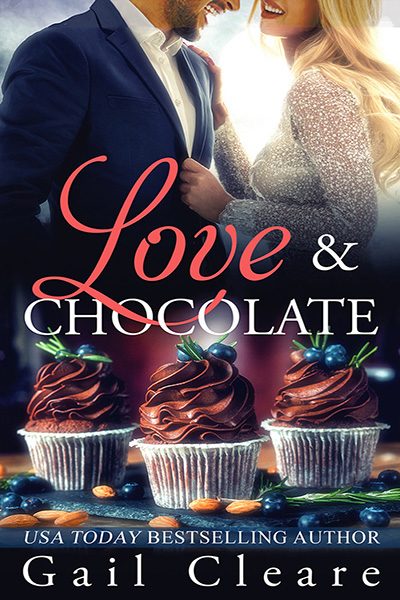 “An engaging, irresistible chocolate-laced romance.” Kirkus Reviews — When Sarah Westwood’s deadbeat husband deserts her and their young son, she takes a job at her family’s restaurant, The Three Chocolatiers, Determined to never fall for the wrong guy again, Sarah vows to stick with chocolate for stimulation and steer clear of men, especially her delicious ice-cream supplier, Blake Harrison. He wants Sarah to give him a chance, but all he gets is the cold shoulder. Since they both happen to be on the same dating site, he’s not above using a little cyber-intel to worm his way into her heart. When the chef collapses mere weeks before an upscale chocolate-themed wedding, the staff goes into a tailspin. With pressure rising on personal and professional fronts, Sarah might just have to let someone sweet melt her defenses.

USA Today Bestselling author Gail Cleare used to write for newspapers, magazines, ad agencies, Fortune 50 companies and AOL. Now she writes fiction, and lives on an 18th century farm in Massachusetts with her family and dogs, cats, chickens, black bears, blue herons, rushing streams and wide, windy skies. When not on the computer, Gail is usually working in her organic vegetable garden or absorbed in nature photography. She can often be found stalking wild creatures with a 300 mm lens.

Cleare's debut novel, "Destined, a Novel of the Tarot" (2011), was a finalist for a Somerset Award, and for the Green Book Festival and New England Book Festival competitions. The audiobook, featuring narrator Marnye Young, will be released in 2018.

USA Today Bestseller "The Taste of Air" (2016), is a womens' fiction family drama, and in 2017 it won Readers' Favorite awards for both the book and the audio book. The sequel is currently in progress.

"Love & Chocolate, a Romance with Recipes," is a new romantic comedy to be released in 2018. It's the first volume of a trilogy featuring the Dumas family and their restaurant, The Three Chocolatiers.

For the latest news, visit http://www.gailcleare.com or Gail's Facebook page at https://www.facebook.com/GailCleareAuthor/

I wrote a column about chocolate for AOL, and produced a chocolate festival. It seemed like a popular topic!