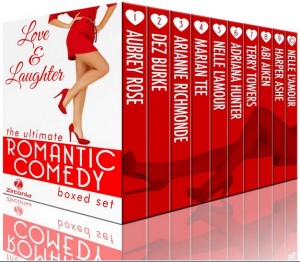 “et yourself be carried away by ten dreamy men–including a sexy bounty hunter, a hot undercover agent, a yummy caterer, a dashing Frenchman, and even a handsome fairy tale prince. Their stories of love and passion will tickle your funny bone and melt your heart.

This exclusive 10-book set includes two full-length novels and eight novellas. If you need a break from dark, damaged heroes and the women who love them, this collection is for you!

Sassy, spunky Jenny Rockfort just moved back to Las Vegas, and when her old high school crush offers her a gig as a undercover agent at a strip club, she jumps all over it… and him.

When Tiana hires a male escort for a wedding she’s expecting dinner and nothing more. Unfortunately, Jordan, an investment banker, thinks he’s expected to deliver the whole “”package.””

Shades of Pearl by Arianne Richmonde:

A beautiful forty-year-old career woman who has given up on love. A twenty-five-year-old French, social-media billionaire with a dark past. Jump aboard Pearl and Alexandre’s passionate roller coaster ride of sex, lies, heartache, and love.

Catch You if I Can by Marian Tee:

If Ianne wasn’t such a coward, maybe she could’ve been a cheerleader in high school. Maybe her dad would know she was his daughter, not his son. And maybe, she could’ve stopped Alex Rockford, her best friend and the hottest cover model for National Geographic, from leaving her for another girl.

What if the Evil Queen from Snow White was sent to rehab for her addiction to beauty and given a second chance at happily ever after? Wickedly funny and darkly shocking, Dewitched will make you see the evil legend in a new light as she rewrites her life.

Truth or Dare by Adriana Hunter:

Behind the microphone, radio disc jockey Wendy Jackson can be anything she wants to be, and her plus size frame simply doesn’t matter. That is until the day when a caller from her past phones in asking her to dinner and she is forced to make a decision. Should she take a chance on love and dare to believe that anything is possible?

The Bounty Hunter and the Girl from the Coffee Shop by Terry Towers:

Bounty Hunter, Lincoln Kyle, has a rule – don’t get emotionally involved with his bounties. But his attraction for Angelique and her claims of being framed has him bending his rules for her as he fights his sense of duty with his developing feelings for her.

Bookstore owner Lucy is still hurting from her ex’s cheating ways when her housemate drops another bombshell. She’s moving out, and taking her weekly rent money with her. To help pay the bills Lucy reluctantly allows the crazy-gorgeous Mark to move in. What will happen when their mutual attraction collides with Lucy’s trust issues?

Sweet for You by Harper Ashe:

When handsome, brooding billionaire Stephen Blake hires cute and curvy Abby Branson to help him launch a new line of gourmet diet desserts, he soon discovers that she’s more delicious than anything his company creates!

That Man by Nelle L’Amour: