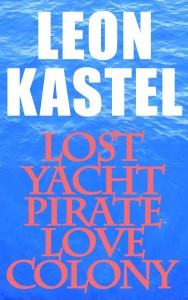 How do good guys become pirates and criminals? When they see a big enough prize to take the risk. These modern day pirates plan to make a big money score. But even “the best laid plans of mice and men often go awry.” And what a way to go when you’ve taken twelve fashion models for ransom and then have to make the best of a wild situation. Piracy on the high seas turns into eroticism on Ralphie’s Cay.

Having enjoyed a good life, full of the best and the worst, and having the time to talk about it through fiction.