You are here: Products Lost: No Return by Jay Toney 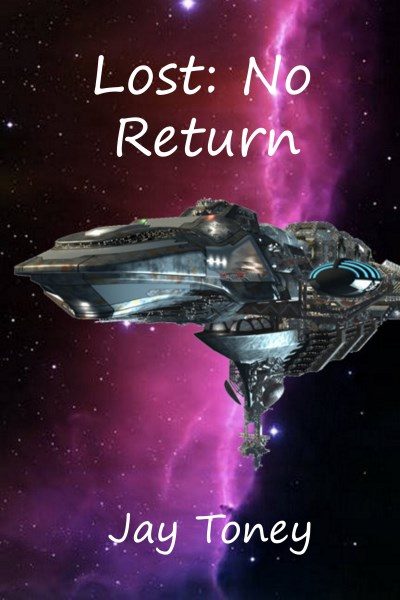 Lost: No Return by Jay Toney

Nathaniel Roberts and his fleet of ships made it through the wormhole, most of them anyways. They are without power and children are coming. Persephone believes babies magically appear in the arms of goddesses when it is time. No one, even her mother can convince her otherwise. Can it be true?
The first people the fleet meet are the Drax. Their species looks like a cross between a chameleon and a human. They are inhospitable and greedy. Given a chance, they would cheat anyone to get their gold. The Drax are overdue for a lesson in manners. Are Nathaniel and Persephone the right people to do it?
There is a gathering happening, and Nathaniel's fleet arrives just in time to register for the event. Leery after a recent battle, the fleet stays hidden in deep space doing repairs while Nathaniel and Persephone take their small fighter to the space station. It turns out that the gathering is a three-day slave auction and they are just in time.
Nathaniel believes that slavery is a just way for criminals to pay back society for their crimes. These prisoners are not guilty of any crime. They are victims; captured because they were unarmed and too weak to defend themselves.
The gods are involved in punishing the slave traders. They give Nathaniel the means to end the slave trade, but the decision is up to him.
The fleet has finally found the Alliance and the Crimson tide. It will be the biggest battle yet. Nathaniel is the recipient of bad news. News, he wasn't ready to accept. He will never find Earth if he continues to follow the same path. Nathaniel must find another way.

I got hooked on reading early in life, reading nearly everything I could get my hands on including the Encyclopedia Britannica. As well as being an avid reader I enjoyed bicycling, skateboarding, fishing, and building models and puzzles. As far back as I can remember, I loved anything to do with aircraft. I joined the USAF as an aircraft mechanic working on the F-4, T-38, F-117. and the F-16. A knee injury stopped me from working on aircraft. My knee couldn't support me on the odd angles and slick surfaces. While in the USAF I attended college. My second love was tormenting my English teacher. I found out she had a fear of death, then she was at my mercy. Anything she said not to do I did just to show her I could. Every essay or theme I wrote dealt with the topic of death, from the first-person perspective of a person undergoing an autopsy, being buried alive, and rising from the grave. She was glad when I graduated. Some authors who inspired me are Robert Heinlein, Harry Harrison, Alan Dean Foster, Piers Anthony, and much more.

Be the first to review “Lost: No Return by Jay Toney” Cancel reply