You are here: Products Look Again, A Novella by Marliss Melton 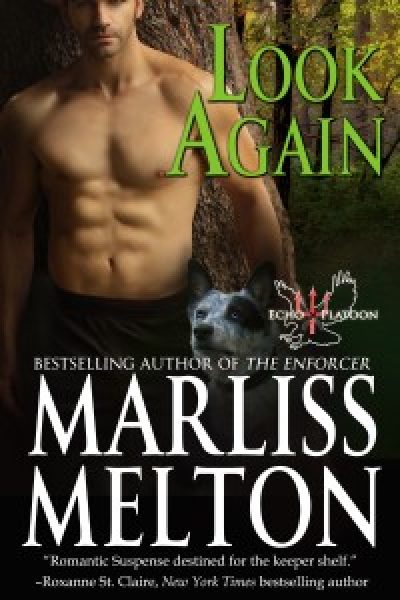 Proceeds from the sale of this book benefit Hero Dogs, an organization dedicated to training service dogs for injured American veterans of war.

Tyler Rexall never considered being anything besides a Navy SEAL. But a mission-gone-wrong has ended his career in the Teams, leaving Tyler handicapped, his self-identity obliterated. Returning to his hometown of Louisa, Virginia, Tyler wallows in despair. He has no idea that the young woman showing up on his doorstep with a dog holds his future in the palms of her hand.

Katie Crowley’s lifelong crush on the formidable “T-Rex” hasn’t waned one iota in the last decade. Seeing him beaten down and disabled arouses her determination to help him, even as she’s being terrorized by a desperate man who is getting bolder by the day.

Can Katie convince a proud man like Tyler to accept that a service dog might change his life? Unfortunately, she may not get the chance or the time to heal him as her heart demands, not when her stalker returns for a final encounter.

Marliss Melton is the author of over a dozen counterterrorist/romantic suspense stories, including two Navy SEALs series (SEAL Team 12 and Echo Platoon), a counterterrorist Taskforce Trilogy, three novellas, and two short stories. She relies on her experience as a military spouse and on her many contacts in the Spec Ops and Intelligence communities to pen realistic and heartfelt stories about America’s elite warriors and fearless agency heroes. Daughter of a U.S. foreign officer, Melton grew up in various countries overseas. She has taught English, Spanish, ESL, and Linguistics at the College of William and Mary, her alma mater. She lives in Williamsburg, Virginia with her husband and their youngest daughter, one of six children. Be sure to “friend” Marliss on Facebook! Visit www.marlissmelton.com for more information.

My readers know that I love a man in uniform, especially the Navy SEALs who train close to my home in southeast Virginia. I also love dogs. So it was only natural that I write a story about an injured Navy SEAL who agrees to babysit a dog as a favor to a former female acquaintance. He has no idea how much the dog–and the woman–will improve his quality of life, but first he must fight for the right to claim them for himself.

You’ll always be a SEAL, man. The words of his close friend Lt. Sam Sasseville echoed in his head. He could still feel Sam’s firm grip on his wrist, still see the compassion and grief welling in the Echo Platoon leader’s dark green eyes.
Tyler’s throat closed up as he fought the urge to bellow like a wounded bear. The unexpected jangle of the doorbell startled him into losing his balance again.
He cast around for his crutch, found it, and hobbled toward the foyer. Who could this be? Not the pastor from New Life Church, he hoped. As much as he respected the man, he didn’t need him dropping by on a daily basis. A glance through the parlor windows showed a black Honda SUV in the driveway with a dog in the back. Who the hell? That was not the pastor’s car.
Unlocking the door, he cracked it open. The pretty woman with chestnut hair whom he’d noticed at Food Lion yesterday stood on his doorstep looking about as comfortable as a worm in hot ashes. She sent him a forced smile that made her look suddenly familiar.
“Yes?” he prompted.
“You don’t remember me, do you?” Her husky voice sounded oddly familiar and extremely nervous.
“Not really,” he clipped with no patience for a guessing game.
“Katie Crowley,” she said, extending a dainty-looking hand. “We went to high school together.”
Katie Crowley. The name did sound familiar. He pinned the crutch under his arm in order to return her handshake when the vision of a chubby girl with glasses and braces flashed through his mind’s eye.
“Oh yeah,” he said, stunned despite his preoccupation that she’d transfigured into such a pretty thing. Her slim hand felt a little moist, confirming her nervousness, but not at all unpleasant to hold onto.
“I’m sorry to bother you,” she said, pulling it back to gesture at the back of her SUV, “but I’ve got a problem. See that dog?”
“Yeah.” It appeared to be some kind of shepherd mix, ugly as hell, staring at them from the interior of a crate.
“I need a temporary home for him.”
He set his jaw, but she plowed on.
“See, I own a kennel and a dog school, but I don’t have room for him. He’s housebroken and quiet and not an ounce of trouble. If you could just watch him for ten days, I’ll take him off your hands then.” She sucked her full lower lip into her mouth and regarded him hopefully.
Tyler frowned at her. “How do you know I’m not a cat person and I hate dogs…of any kind?”
“Because you used to have a black lab named Sadie who followed you everywhere.”
Well, hell, she had him there! Plus her cat-like eyes and that dusting of freckles across her nose made it hard for him to let her down.
“Please?” Her eyebrows, darker than her wavy hair, flexed in an earnest appeal. “I have all of his food and everything. He’s really no trouble. It’s just ten days,” she repeated. Then she licked her upper lip in a way that made his groin tingle unexpectedly.
He cleared his throat. The setup here was so bizarre he briefly wondered if he might be hallucinating, except he’d stopped using pain meds a long time ago.
“I can’t take care of a dog.” His refusal came out in a defensive snarl.
“Why not?” She appeared genuinely mystified.
He displayed the crutched. Duh! “I can’t hold a leash.”
“Oh, that doesn’t matter.” With a toss of her head, she obliterated his excuse. “Your yard is fenced,” she pointed out. “Just keep him back there with you for a while, and he won’t try to leave. It’s the shepherd in him.” She started backing down the steps, clearly taking his silence as assent, and going to fetch the dog.
“Wait,” he snapped, growing more flustered by the second that this woman was ignoring him. “I never said I’d watch him for you.”
“I know.” She paused one step down to look up at him, her gold-green eyes as pretty as springtime. “But I really need you to, for old time’s sake.”
What the fuck? He barely even remembered her.
“I’ll be right back. You’re going to love him.” And then she was jogging toward her car. His gaze fell to her bare, shapely legs, and his protest sputtered. Early May had brought in warmer weather, a circumstance for which he was suddenly very grateful.

Be the first to review “Look Again, A Novella by Marliss Melton” Cancel reply