You are here: Products Long Overdue by Julia Crawford 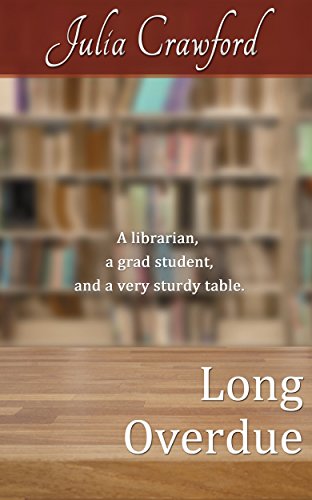 June's had a crush on Morgan since her first day as a university librarian, but he's been way to focused on his studies to even notice her – or so it seemed – until the night he stays late to finish his dissertation, and she finds herself alone with him in a room with a very sturdy table.

WIll she finally get the chance to act on her desires? Will Morgan prove capable of focusing on a person the way he's focused on his work all these months?

She also usually writes under the name “Georgeanna Bingley”.

He took his hand and gently pushed back my hair, then he put a finger under my chin and pulled up so I was forced to make eye contact. “Do you want this?” he asked, his face inches from mine.
“I think we’ve already established that you know the answer,” I said.
“And now we’re establishing that I want to hear you say it. Tell me how much you want it, June.”
The arrogance of him was so annoying! I lifted my eyes and met his gaze, expecting to see a smirk. Instead I saw longing, not just for me, but for my answer. In a wonderful moment of clarity I realized that he needed to hear me say how hot he was. I decided to give him what he was asking for and enjoy the results.
“I do want this, Morgan,” I said, “I’ve wanted you for a long time.” He smiled at me, and while I could still see the arrogance in his face, I could also see the relief.
I could feel him looking at me. I probably should have sucked in my stomach or arched my back so my boobs would look better, but instead I just concentrated on keeping my eyes cast downward. I was down to my underwear, in the library I worked at, with a guy I’d never even been on a proper date with. It was definitely not the sort of situation I usually found myself in.
“Turn around,” he said, quietly.