You are here: Products Long, Hot Summer with my Twin Stepbrothers by Annabeth R. Starr 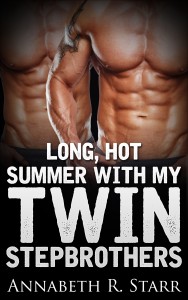 Angela remembers vividly the long summer months she spent at her father’s beach house with her twin stepbrothers Todd and Jeremy. She had been just ten when they began their friendship. The boys had helped her through the hard adjustment of divorce by taking her under their wing and the three had become inseparable. As the boys began to become young men, they forgot the games they had played with Angela and their attention turned to dating the beautiful young women who clamored to get a chance with the dark and handsome twins.

Awkward teenage Angela is left waiting for the twins to remember her, but by the time she is ready for college, she feels long forgotten. Determined to regain Todd and Jeremy’s affection, Angela spends her time and money turning herself into the woman she imagines that the twins could never resist. When a family reunion offers her the opportunity to reunite with Todd and Jeremy, Angela pulls out all the stops, arriving as the femme fatale she had always wished she could be.

The twins are drawn to Angela like moths to a flame and soon the three begin a new game that ignites another long, hot summer.

Be the first to review “Long, Hot Summer with my Twin Stepbrothers by Annabeth R. Starr” Cancel reply