You are here: Products Living A Beautiful War by Debra Kayn 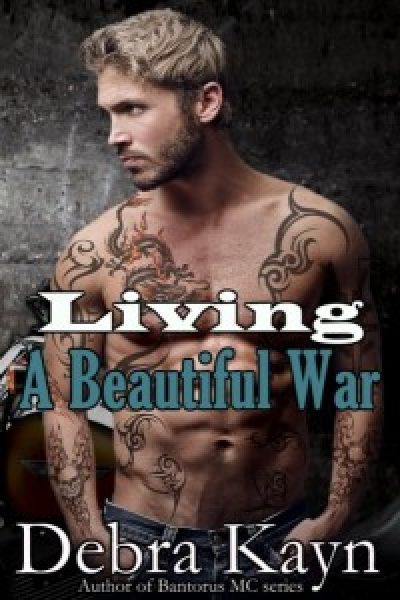 Wild women, good times, and easy rides allow Ink to hide the emotional ties he has with Lilly, the daughter of the president of Bantorus Motorcycle Club. With two warnings to stay away from Lilly on his record, his addiction swings wildly out of control and he can no longer bury the past. Either he’s going to lose his club or Lilly will break up her family, and that will destroy them both.

Lilly’s forbidden love for Ink has survived her childhood straight to adulthood. The more she fights for both of them, the closer she comes to finding out what is keeping Ink from claiming her. This time, she wonders if it wouldn’t be best to point her boots toward Pitnam and live the rest of her life knowing she’ll never have the one man she loves.

With Silver Girls under Lilly’s management, the Moroad MC taking favors from Bantorus, and the militia’s orders skyrocketing, Ink’s time is running out. He’s living a beautiful war full of addictions, rules, and heartbreak, and the only one who can save him is Lilly.

When Debra was nineteen years old, a man kissed her without introducing himself. When they finally came up for air, the first words out of his mouth were…will you have my babies? Considering Debra’s weakness for a sexy, badass man, who is strong enough to survive her attitude, she said yes. A quick wedding at the House of Amour and four babies later, she’s living her own unbelievable romance book.

Readers! I wrote a book about what I love, what I know, what is a part of me, and my readers turned the Bantorus MC series into an Amazon best selling series.

Outside the backdoor, she leaned against the old brick building and closed her eyes. The cool night air brought little relief to her overheated body. Most days, she successfully concentrated on the good things happening to her, because they outnumbered the bad.
She loved her job of managing the Silver Girls. The business, while established, was young and the potential to make some serious dough was at her fingertips. She wanted to bring her ideas to fruition, and establish a business that’d succeed in a struggling economy. Until the offer came to take over Silver Girls, she hadn’t realized all her training, her education and experience, made her perfect to run an adult entertainment business.
She wanted to stay in Federal and take the job to the next level, but her heart couldn’t take much more. Even if she had to put away her dreams, go back to Pitnam, and hit the pavement looking for a new job, she would if it meant Ink would be happy again.
The misery she saw each time she looked at him matched her own. They were both going to break being this close and having to stay away from each other.
The door swung open. She opened her eyes and straightened, not wanting anyone to question why she stood outside pouting.
Ink closed the door and kept his distance. Her lungs compressed, making breathing difficult. She sucked in air. She’d already ripped out her heart and laid it at his feet, offering to give up everything to be with him.
He’d pushed her away.
She’d learned her lesson.
He continued to look at her without saying a word. She left the security of the wall and walked. Six feet away from him, he hooked his fingers under her belt and whirled her around until she caught herself against his chest.
A broad, solid chest.
A warm, tatted chest.
A chest holding a wildly beating heart that pulsed against the palms of her hands.
“No,” she whispered, unsure if the words made it past her lips.
His pained gaze called to her. “Need you.”
“You can’t,” she said, growing stronger.
If he couldn’t save himself, she’d protect him. He was strong, too strong, and because of that strength, he had no idea what was bad for him.
The club wouldn’t allow him to make another mistake or they’d strip him of his patches, and he’d be gone. She had to make sure he stayed away from her to keep him in her life.
“It’s my risk,” he whispered. “Give me a little, Ace. You’re killing me.”
The nickname he only used when alone with her tipped her off balance. He’d called her Ace since she was fourteen and had slipped him two cards during a poker game. Nobody had caught her, and he’d won a lot of money from the other bikers. The shared smile he gave her after the game thrilled her. The secret they held was not the last one they’d keep.
He leaned down, lowering his chin. Even with her high-heeled boots on, she stretched to her toes to get closer. She moistened her lips, caught between running away and throwing her arms around him.
“Stop thinking shit.” His husky, low voice soothed her. “We’ve never been able to fight this.”