You are here: Products Little Girl Lost by Mia Frances 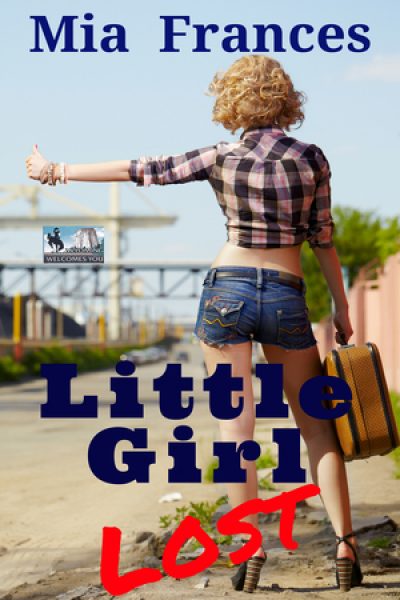 Wyoming sheriff Zac McHenry is fit to be tied. A new “working girl” just showed up at a local truck stop, ruining his stakeout. There’s been an influx of transients passing through his county lately. Bringing an epidemic of drugs, crime, and vice with them. The last thing he wants is another hooker setting up shop in town. He’s determined to send her packing. He’s 6′ 4″ and she’s a little bit of a thing…how hard could it be? Turns out getting rid of her isn’t as easy as he thought. When he barges into her motel room, she thinks he’s an attacker and wallops him with her purse. She’s arrested for assaulting an officer and hauled off to jail.
Zac soon realizes things aren’t what they seem. Ali Bellabonafortuna is no hooker. She’s a youth librarian from upstate New York. Much to Zac’s chagrin, Ali is well connected. She knows several state and federal judges who intercede on her behalf. He’s forced to let her go. Thinking she’ll leave as soon as she’s released, he checks her out of her motel room, but Ali’s not going anywhere. She’s staking out the truck stop too, looking for the man who picked up a 13-year-old runaway named Peeky. The girl participated in a program for at-risk teens at Ali’s library. She disappeared from the truck stop a week ago and hasn’t been heard from since. Ali’s not leaving until she finds her. There’s a rodeo in town and her room’s already been rented out. In fact, there are no rooms to be found anywhere in the area for the next four days. Ali’s temporarily homeless and its Zac’s fault! There’s only one thing to do—she’ll just have to move in with him until another room opens up. Zac thinks his house guest is a foulmouthed, ill-behaved hellion. Ali thinks he’s an interfering, arrogant bully. But when they work together to investigate a case of kidnapping, human trafficking, and murder…sparks begin to fly. Is this any way to start a romance?

Mia Frances is the pen name of author Mary Vigliante Szydlowski. As Mia, she's the author of the dark post-apocalyptic romance, TRIBES; steamy romantic suspense novel, Little Girl Lost; and the erotic romance, murder mystery series: IN HIS KEEPING: TAKEN, IN HIS KEEPING: BANISHED, and IN HIS KEEPING: CLAIMED.
Her Science Fiction/Fantasy works include novels: The Ark (Jarl Szydlow), The Colony (Mary Vigliante), The Land (Mary Vigliante), Source of Evil (Mary Vigliante), and novella, The Hand of My Enemy. She's also the author of horror novel, Worship the Night; and Dark Realm, the tale of a dystopian world ruled by Satan. In addition, she's the author of mainstream novel Silent Song. She’s also published 10 children's book: Are We There Yet?, Little Sowbug & the Big Flood, Ghoul School, Millie Muldoon & the Case of the Halloween Haunting, Millie Muldoon & the Case of the Thanksgiving Turkey-napper, Millie Muldoon & the Christmas Mystery, A Puddle for Poo, Kia’s Manatee, The Duck in the Hole, and I Can't Talk I've Got Farbles In My Mouth.
Her short stories, articles, children’s stories, essays, and poems have appeared in books, magazines, newspapers, and on the web. She's also a contributor to the Chicken Soup for the Soul anthologies: The Dog Did What?, Volunteering and Giving Back, Merry Christmas!, Mom Knows Best, and Life Lessons from the Dog.
She's a member of the Authors’ Guild, Society of Children’s Books Writers and Illustrators, Science Fiction & Fantasy Writers of America, and Romance Writers of America.

The idea for Little Girl Lost came from a Dateline program I saw on the Investigation Discovery channel about 2 young cousins that had been kidnapped from Ohio and transported to truck stops out of state to be trafficked. I did a lot of research on the topic and decided it would make a good backdrop for a romantic suspense novel. I decided my heroine, Ali, would be a youth librarian from upstate NY who tracks a 13-year-old runaway from Albany to Wyoming. I thought it was only fair since in a previous book I made my librarian character a homicidal maniac. Ali is a former foster kid who's struggled to make a life for herself. I decided on her background after seeing a TV show about how difficult life is for foster kids when they age out of the system. Ali runs programs for at risk teens and preschoolers at her library. The girl she's after, a foster kid too, participated in her teen drop-in program. Ali is conducting her own investigation when she runs afoul of the local county sheriff. He's big, bossy, and a conservative Republican. She's takes after me…a petite, liberal Democrat with a short temper and a big mouth. They clash, but opposites attract even if they don't realize it at first.

She had to get into her room and lock the door before he caught up with her….
"Hold up! Hold up!"
"What the hell? Her heart began thumping in her chest. A hold up? Did he mean to rob her? Or worse? Holy shit! He was right behind her! She grabbed the room key out of her pocket and lunged at the door. Hands shaking, she got the key in the lock and turned it. As soon as the door was ajar, a huge paw of a hand shoved it all the way open.
"I'm Sher…" before he could finish, Ali let out a scream, loud enough to wake the dead in the next county.
She quickly slipped the heavy bag off her shoulder and turned on him, first throwing the hot coffee in his face, then slamming the end of her satchel-style purse into his crotch. He bellowed in pain, sounding like an angry moose. The pain was so intense he paled then staggered. She hadn't stopped him, only slowed him down a little. And not for long. He was flailing his arms, one hand trying to wipe the burning coffee from his eyes, while the other reached for his testicles. Before he could move his hands to protect his balls, she swung the bag back, then forward, walloping him again, only this time harder! He groaned in agony, dropping to his knees. A few seconds later, he was howling in pain and making gagging sounds like he was gonna puke.
Wanting to make sure he didn't get up again, she swung the bag and hit him upside the head.
He felt like his skull was exploding. Stars and sparkles of light danced in front of him as he crumpled to the floor; sprawled on his belly across the threshold.
Ali looked down, trying to get her breathing under control. She was so scared she was hyperventilating. The last thing she needed was to pass out now. She had to get out of here before he came to. She couldn't step around him or over him. He was huge! She'd have to walk on him to make her escape out the door. That wasn't going to be easy…he was writhing on the floor like a snake! She started yelling for help at the top of her lungs. She grabbed the doorjamb for support and stepped up on his shoulder. From there it was one step to the middle of his back, then another to his ass and then she'd be out the door, safe and home free. She was about to take the next step when she heard an enraged growl. Before she knew what was happening his body shifted, his shoulder lifting. She lost her footing and he threw her off. Ali shrieked even louder as she fell backward into the room. Landing with a thud on her butt and causing excruciating pain in her ankle. She watched in terror as he struggled to his knees. His face was red and contorted in rage, his burning eyes glaring at her with fury. She let out another bloodcurdling scream. "Help! Help! He's going to kill me!" she wailed as she scrabbled back away from him. Her right hand plunged into her purse and began searching frantically for the pepper spray and her stun gun flashlight. She pulled them out and brandished them in front of him, but that only seemed to piss him off more. She was still screaming when she heard running footsteps.
"What's going on here?" a loud, authoritative voice demanded to know. A tall dark-haired man wearing a brown Stetson and a sheriff's badge appeared outside the door.
"This man broke into my room," she choked out. "He tried to attack me!"
"Like hell I did!" He turned his head to face the man.
The officer's mouth gaped open. "Sheriff, what in God's name happened to you?"
"Sheriff?" her eyes widened in disbelief. Oh shit!
"This…this…" he struggled to find the words. "This she-devil happened to me."